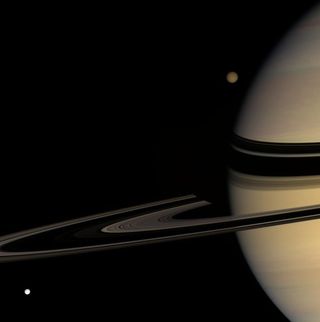 Titan in Saturn’s system: Titan (top) emerges from behind its parent planet, Saturn. Another satellite, Tethys, is visible at the bottom left of the picture.
(Image: © NASA/JPL/Space Science Institute)

Our knowledge of Titan has improved considerably over the last five years. Before that, Saturn's largest satellite had only been hastily approached by a handful of space probes.

In 1980, the Voyager-1 spacecraft took advantage of a flyby to take a few mysterious, yet frustrating close-ups of Titan's opaque, rusty atmosphere. Despite its color, Titan actually seemed to look a lot like the early Earth.

There was a general feeling of excitement and perplexity: what lay beneath this atmosphere? Could Titan support life?

In July 2004, NASA's Cassini space probe entered Saturn's distant realm, this time to stay for good. It was designed, right after Voyager's visit, by a scientific community eager to unveil those new mysteries.

And unveil them it did. It has been hard to keep up with the flow of discoveries delivered from Titan to Earth since then. We now know that the 5,150 km (3,200 mile)-wide world has lakes and riverbeds. Earlier this year, even fog was discovered at Titan's South Pole.

Even more compelling is the fact that, just like on Earth, all those features are tightly related. Evaporated liquids create clouds, which are carried around the planet by winds — and probably cause precipitation. This has never been seen on any other extraterrestrial body.

Moreover, Titan's atmospheric cycle is not a water cycle. It is instead an exotic climate of hydrocarbons that features methane and ethane. On Earth, those are gases, but the extremely cold temperature of Titan, around -290°F (-180°C), allows them to be liquid as well (and maybe even solid).

Titan scientists grew very excited by these discoveries. "We can study the meteorological cycle on another planetary body involving a different molecule (methane)," said Emily Schaller, of the University of Arizona's Lunar and Planetary Laboratory. She started observing Titan from the ground in 2002, at the beginning of her PhD, two years before Cassini arrived.

"I was monitoring the weather on Titan using the NASA Infrared Telescope Facility on Mauna Kea. I looked for daily changes in Titan's brightness that were due to the presence of clouds."

Ground-based observatories such as the 3-meter NASA Infrared Telescope Facility (IRTF) might indeed not be as detailed as Cassini for high-resolution pictures, but when it comes to daily monitoring, they are the ideal instruments. Indeed, Cassini only flies by Titan roughly every two months.

So what is it like to study the daily changes of another world? "Nearly every night a spectrum of Titan is taken with IRTF," Schaller explains. "Every morning I download and process that data to determine the amount of cloud cover on Titan. The result is that I get a daily weather report for Titan."

The IRTF cannot resolve Titan's globe: it just sees a point of light. You can tell when there are clouds because the dot gets brighter at certain wavelengths. When there seemed to be a cloud showing up in Titan's atmosphere, Schaller would call her colleague Henry Roe of the Lowell Observatory in Flagstaff, Ariz., who had a target-of-opportunity proposal on the bigger 8-meter Gemini North Telescope. The National Science Foundation-supported Gemini telescope, equipped with adaptive optics, is able to take a resolved picture of Titan's disk to determine the latitudes and longitudes of the clouds Schaller detected with IRTF. Schaller continued with these observations for six years, the time it took her to complete her PhD studies.

"The day I handed in my dissertation, I reduced the daily data and was just shocked. I thought at first I did something wrong. I emailed Henry Roe, and the next night he triggered observations on Gemini. Sure enough, there was a huge cloud in the tropics." It was the first time such an observation was made. "I joke that it was Titan's little present to me," said Schaller.

Titan's climate is expected to change rapidly in the coming months, as the distant Saturn system reached the spring equinox in August 2009.

"The year on Titan lasts about 30 Earth years. My thesis lasted six years — not even a Titan season!" explains Schaller. "It is now the equivalent of March 21 on Titan. When I started my thesis, it was December 22. We are now entering an interesting time as Titan is changing seasons," she adds.

Scientists try to predict what the impact of the coming Northern spring will be. They are using Earth atmospheric models, modified for Titan's smaller size and temperature. Titan provides us with an Earth-like, yet alternative atmospheric circulation system to study. The observation of seasonal climate changes on an alien world may possibly help us better understand how things work on Earth too. This process is called comparative planetology.

Since Titan is so similar to our planet, some scientists are asking whether it could even support life. "It is much further away from the Sun," said Schaller. "The cold temperature means that chemical reactions occur very slowly, so the chances of life are very slim. Though there might be a chance of life further down in the interior of Titan."

Indeed, some heat could be preserved inside Titan, and last year Cassini's observations provided clues for a potential ocean of hydrocarbons under the surface. However, if there is life anywhere else in the solar system, many scientists suspect it may be more likely to appear on Jupiter's icy moon Europa, which is closer to the Sun and likely to have a subsurface ocean of water.

After Cassini and the successful landing of the piggyback European Space Agency Huygens probe on Titan's surface in 2005, the scientific community is already thinking about the next mission to explore Titan. Exotic concepts have been proposed, such as balloons or boats to study the lakes, as part of a so-called Titan Saturn System Mission.

Read more and watch a webcast about the findings in the related press release. Listen to the winds of Titan here.