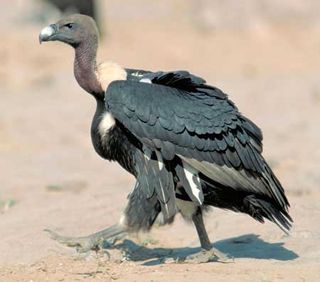 A white-backed vulture, one of South Asia's most threatened birds. The scavengers provide a valuable carcass-disposal service in a region where sacred cows abound. The cattle's rotting corpses can be terrible health hazards.
(Image: © Goran Ekstrom/RSPB.)

Vulture populations in India and surrounding South Asian countries have suffered catastrophic declines in recent years, dropping by more than 97 percent, and three species of the scavenging birds are now almost extinct.

A newly developed test, which may be able to quickly identify the deadly substance behind the species' decline, offers new hope for birds that "have an image problem," acknowledged Chris Bowden, the Vulture Programme Manager at the UK's Royal Society for the Protection of Birds (RSPB).

"But at the same time, vultures are the most efficient cleaners of the environment and actually dispose of all types of carcasses, particularly cow carcasses" Bowden said. "In rural communities, people really do recognize how valuable they are."

In the 1990s, India's Oriental white-backed vultures began dying by the tens of thousands. Soon, two more species, the Indian vulture and the slender-billed vulture, began to succumb to the same mysterious malady.

In 2004, scientists finally figured out what was behind the massive die-off: painkiller for cows.

Diclofenac, an anti-inflammatory drug often prescribed for humans but banned for veterinary use in North America and Europe, had become popular among vets in South Asia.

"Often if a cow is in pain, or has had various problems, if you injected it, it would feel better, and it would stand up, which would make the vet look good," Bowden told OurAmazingPlanet.

When vultures ate the carcasses of animals injected with the drug, they suffered kidney failure. Within a few days of eating Diclofenac-laced flesh, a vulture's internal organs become coated with a thick, white paste, and eventually stop functioning.

By 2006, bans on Diclofenac for veterinary use were in place across India, Nepal and Pakistan, but enforcing the laws has proved difficult. Conservation groups are urging vets to switch to a drug called Meloxicam, an alternative to Diclofenac that is safe for vultures, but change has been slow to take hold, and vultures are still dying.

“With our new method we have simplified the detection of Diclofenac in animal tissue significantly,” Dietmar Knopp, of Munich's Technische Universitaet, whose team developed the test, said in a statement.

The test, which researchers say is easy to administer and read even for non-scientists, could be used at the various vulture-breeding centers around South Asia, where conservationists are trying to raise fledgling vultures before the birds go the way of the Dodo.

The procedure is currently undergoing extensive testing at an Indian vulture-breeding center.

The test might enable vulture-breeding programs to use readily available cow carcasses to feed their hungry charges, which would save the huge sums of money they must now spend to raise Diclofenac-free goats for the birds.

Additionally, the test could reveal which vets are still using the illegal painkiller on cows, and thus increase compliance to Diclofenac bans throughout the subcontinent.

Bowden said that if the new test really can easily identify Diclofenac-tainted meat, "it would be a huge breakthrough."

However, Bowden cautioned that with South Asian vultures still teetering on the brink of obliteration, further testing is needed before the procedure is considered a failsafe protection for the nearly-extinct scavengers.

"Because we can't afford to get it wrong even once," Bowden said.