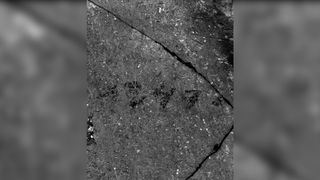 The Hebrew writing on this jar says that it belongs to a man whose name can be translated as "Benayo" or "Benayau."
(Image: © Azusa Pacific University)

A 2,800-year-old jar inscribed in Hebrew with the Yahwistic name "Benayo" has been discovered at Abel Beth Maacah, a site in northern Israel that is mentioned numerous times in the Hebrew Bible.

Since Benayo (or Benayau) is a Yahwistic name (it incorporates part of Yahweh's name), the man likely worshipped Yahweh, the god of Israel. In the north, names mentioning Yahweh generally ended in Hebrew letters that can be translated as "yo" or "yau," said Robert Mullins, a professor in the Department of Biblical and Religious Studies at Azusa Pacific University in California who is co-director of excavations at Abel Beth Maacah.

Related: From Jesus' Time: The Most Interesting Biblical Discoveries

The jar was found next to several other jars in a room that has been only partly excavated. One of the other jars contains residue that may come from wine, with a grape pit sitting beside it. Though more research is needed to confirm the status of the jars, it's possible that all the vessels contained wine and Benayo "may have been a wine grower," Mullins said. He noted that the land around Abel Beth Maacah is ideal for wine production.

Archaeologists will resume excavations this summer, investigating more of the room during these efforts. Mullins said he hopes to find more jars with writing on them.