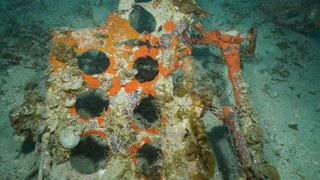 Punched holes in a panel from an SBD-5 Dauntless dive bomber are visible in wreckage resting on the floor of Truk Lagoon near the main debris site.
(Image: © Photo provided by the University of Delaware, courtesy of Dr. Mark Moline)

Three WWII aircraft that were shot down during a decisive U.S. victory in the Pacific Ocean were missing for decades. Now, 76 years later, they have been found.

A recovery operation discovered pieces of the long-lost planes at the bottom of Truk Lagoon in Chuuk State, part of the Federated States of Micronesia.

Hundreds of U.S. aircraft launched from carriers on Feb. 17, 1944, during "Operation Hailstone," pummeling a Japanese naval base in Truk Lagoon that was so well fortified it was known as "the Gibraltar of the Pacific," representatives of the recovery expedition said in a statement.

When the smoke from the two-day battle cleared, more than 250 Japanese aircraft and nearly 50 ships were destroyed. But 30 American aircraft were also lost, along with 23 aviators and crewmen. The three planes that were recovered went undetected until 2019, even though the spot is a popular destination for divers, according to the statement.

Related: The 20 most mysterious shipwrecks ever

The mission to find the planes was led by scientists and volunteers with Project Recover, a partnership between researchers at the University of Delaware; Scripps Institution of Oceanography at the University of California San Diego; and the BentProp Project, a private organization of divers, aviators and historians dedicated to finding WWII service members missing in action in the South Pacific. Since 2012, Project Recover has conducted underwater searches for missing U.S. military craft and personnel, combining data from official records, eyewitness accounts and underwater search technologies such as sonar, thermal cameras and diving robots, according to the project's website.

Launched from the American aircraft carriers USS Enterprise and USS Intrepid during Operation Hailstone, two Dauntless dive bombers and one Avenger torpedo bomber were among the missing U.S. planes. Researchers suspected that the planes sank in Truk Lagoon based on interviews with Chuuk islanders, official reports and memoirs from survivors of the battle, said Colin Colbourn, lead historian with Project Recover.

One lucky piece of information came from a U.S. serviceman — an airplane gunner in Operation Hailstone — who mentioned in a memoir that he saw one of the Dauntless dive bombers struck just as he was firing at a Japanese transport ship, which also sank. The historians quickly realized that pinpointing the location of that sunken ship could lead them to the wreckage of the lost bomber, Colbourn told Live Science.

"We were able to line up this piece of the puzzle with this other piece of the puzzle, in order to say, 'OK, let's focus our search around this ship.' And that was actually where we ended up finding this airplane," Colbourn said.

Underwater surveys, conducted by Project Recover from April 2018 through December 2019, covered close to 27 square miles (70 square kilometers) of the sea bottom in Truk Lagoon. Sonar scans identified potential airplane debris, which the scientists then investigated more closely by deploying divers and robots equipped with high-definition cameras. They found debris fields with remains of the three aircraft at depths from 100 feet to 215 feet (31 to 66 meters), according to the statement.

Many of the big Japanese ships — oil tankers and merchant vessels measuring hundreds of feet long — that were sunk in Truk Lagoon in 1944 have since become overgrown with coral and are now popular destinations for divers to visit.

"The holds of some of these ships are actually filled with Japanese airplanes and trucks," said Colbourn. "These are amazing places to go scuba diving."

By comparison, airplanes that broke into fragments aren't necessarily recognizable to recreational divers, which could explain why the missing planes — or what was left of them — were overlooked for so long, Colbourn explained.

As for the crewmen who were aboard the planes, there's "a high likelihood" that intact remains could be found inside the wreckage, particularly in the case of the TBM/F-1 Avenger torpedo bomber, in which two crew members "were pretty much locked inside the back of the airplane," Colbourn said.

Now that the crash sites have been located, archaeologically surveyed and mapped, Project Recover will turn its data over to the U.S. Department of Defense's Defense POW/MIA Accounting Agency, Colbourn explained. The federal agency will then evaluate the sites for the possible recovery and identification of any remains.

"We won't know until that recovery actually happens, whether anyone is still inside the aircraft. But from our experience, I'd say that there is a very good probability that that is the case," Colbourn said.