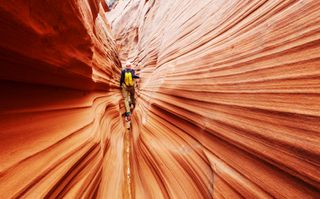 You can see the different layers of rock laid down over time in Utah's slot canyon in Grand Staircase-Escalante National Monument.
(Image: © Shutterstock)

From the emergence of life to mass extinctions, Earth has gone through incredible changes in its 4.6 billion years. With so much history, how can researchers keep track of what happened when?

The system many scientists have settled on is the International Geologic Time Scale (laid out here in the International Chronostratigraphic Chart), which breaks geologic time into five units. From the longest to the shortest and most precise, those units are eons, eras, epochs, periods and ages.

The various stages of geologic time are "defined by visible changes in the fossil record," according to Jacquelyn Gill, associate professor of paleoecology and plant ecology at the University of Maine. Fossils are a handy tool in this dating work for a few reasons. For one, life has likely been around for about 90% of Earth's existence, so the history of Earth is paralleled by the history of life. Fossils are also useful because changes in the fossil record reflect changes in ecology, that is, the relationships between living things and their environment. These changes in Earth’s ecology tend to reflect the major events in the planet’s history, Gill said.

One important moment in geologic time was the transition from the Mesozoic era to the Cenozoic era about 65 million years ago. The change was spurred by the asteroid impact that eventually killed the nonavian dinosaurs.

"That was one bad afternoon that took time to play out fully," Gill told Live Science. The effects of that bad day have rippled through the tens of millions of years since. It ushered in our current era and allowed mammals and flowering plants to thrive.

"If you [were to] time travel, that's [the earliest point] when you'd know you were on planet Earth," Gill said of the early Cenozoic era, "at least until some weird mammal ran by."

But you don't have to get your hands on a time machine to appreciate the magnitude of the change between the Mesozoic and the Cenozoic. Careful study of a rock layer can be enough to help a researcher figure out its age. For example, the impact credited with ending the Mesozoic era and beginning the Cenozoic era is marked with a layer containing unusually high levels of iridium, which is much more common in meteors than in the Earth’s crust.

Other changes in mineral and element ratios can offer evidence of Earth's tumultuous history, too. For instance, a little more than 5 million years ago, tectonic activity closed the Strait of Gibraltar, eventually causing the Mediterranean Sea to shrink and its mineral content to spike. This event occurred during the Messinian age and marked the end of the Miocene epoch and the beginning of the Pliocene epoch, about 5.3 million years ago.

"Salt and gypsum deposits are now observable in many of the countries that surround the Mediterranean and are now exposed as rocks above the modern sea level," because of tectonic activity in the millions of years since it happened for the last time, according to Karl Wegmann, an associate professor of geology at North Carolina State University.

Recent advances in geochronology, or rock dating, allow geologists to measure radioactive decay and "assign very precise absolute ages to geologic events," Wegmann told Live Science via email. To do this, geochronologists calculate the age of rocks by comparing the proportions of certain isotopes, or elements that have a different number of neutrons in their nuclei than normal. All of these approaches fit together like a jigsaw puzzle to give researchers a common language for discussing the distant past.

The geologic time scale is a scientific tool, but it's also an artifact of history. Objectively measuring properties like radioactive decay can tell researchers when layers of rock formed, but it's up to scientists, who are often building on the work of their predecessors, to decide how to slice and dice the data into geologic time frames. One of the most contentious questions in chronostratigraphy is how to define our own time.

"The Holocene is kind of an arbitrary epoch," Gill said. The Holocene epoch began about 12,000 years ago when Earth began warming after the last ice age. But according to Gill, the end of that ice age, even though it coincided with the transition to a new epoch, isn't of greater geological importance than the end of the ice ages before it.

Even today, scientists are still naming new windows of time, including the Chibanian age, named after a Japanese prefecture where the sediment defining the age was found. Many scientists and others claim that humans’ recent effect on the planet merits the declaration of a new age, the Anthropocene, while other scholars say the Capitalocene more accurately conveys the social systems that have so greatly affected the planet since the Industrial Revolution.