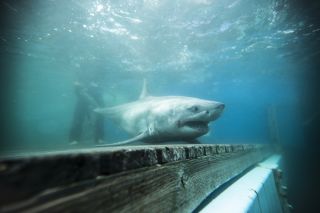 Great white sharks (Carcharodon carcharias) are often imagined hunting large prey. But apparently they spend more of their time ⁠— at least as juveniles ⁠— nosing around on the seafloor for little morsels of food.

Between 2008 and 2019, researchers studied the stomach contents of 40 juvenile great white sharks captured off the coast of eastern Australia. That information, combined with data from studies elsewhere in the world, painted a surprising picture of how these young sharks feed. The sharks' main food was a large fish: Australian salmon (Arripis trutta), representing about one-third of what they ate. But more than a fifth of their diet was made up of critters that swim just above the ocean bottom, live in reefs, or bury themselves in the sand.

Here's a breakdown of the shark diets, according to the paper, which was published June 7 in the journal Frontiers in Marine Science:

"This evidence matches data we have from tagging white sharks [with electronic trackers] that shows them spending a lot of time many meters below the surface," Richard Grainger, lead author of the study and a researcher at the University of Sydney, said in a statement. "The hunting of bigger prey, including other sharks and marine mammals such as dolphin, is not likely to happen until the sharks reach about 2.2 meters [7.2 feet] in length," Grainger said.

There was also some evidence that the male sharks went after stingrays and their cousins more often than female sharks did; but the researchers noted that there was a fairly small sample size from which to make this claim.

Great white sharks are well-understood compared with other shark species, said Catherine Macdonald, director of the Field School (a marine biology education program) and a conservation biologist at the University of Miami in Florida, who was not involved in the new study.

But there's still a lot to learn about how white sharks behave.

"These results align well with what scientists know about white shark diet and how target prey species change as individual sharks increase in size," Macdonald told Live Science. "From a scientific perspective, that's great news, because it helps confirm the results of previous studies done using different techniques, and suggests we already have a pretty good general picture of white shark diet at different life stages."

It's important to understand that these results represent a snapshot of how these sharks lived in a particular place and time, Macdonald added. Sharks eat many things, and it's likely that their choices are constantly in flux as the world around them changes. These predators likely instinctively weigh factors like their risk of injury or encountering another predator, their odds of catching the prey, how nutritious the prey is and how hungry they are in choosing what to hunt, she said.

"Humans are having unprecedented impacts on marine ecosystems, and so what [they are] measuring isn't really 'what white sharks eat' ⁠— it's 'what white sharks are currently eating based on all of the effects human actions have already had on their ecosystems,'" she said. "The paper identifies eastern Australian salmon (A. trutta) as an important food item ⁠— but fishing pressure, changes in ocean temperature and availability of their prey means that populations of A. trutta look quite different today than they have historically."