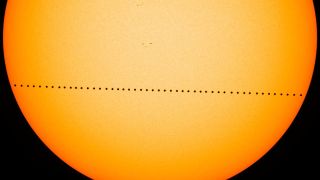 Mercury's transit across the sun in 2016 took 7 and a half hours. This composite image of the journey was created with visible-light images from instruments on NASA's Solar Dynamics Observatory.
(Image: © NASA's Goddard Space Flight Center/SDO/Genna Duberstein)

Our cosmic neighbor Mercury is the runt of the solar system; it's not much bigger than Earth's moon and is so hard to spot that it's known as "the elusive planet." But we're about to get a rare and spectacular view of the tiny world as it sails across the sun in an event known as a transit.

On Monday (Nov. 11), Mercury will pass between Earth and the sun. Because the planet is so tiny and so close to the sun, it doesn't block the sun's light, as the moon does during an eclipse. Rather, Mercury will be visible from Earth as a wee dot silhouetted against a vast, glowing, solar backdrop, according to NASA.

Here on Earth, we'll be able to watch that black speck move slowly across the sun, a sight that appears only 13 times in a century. And if you miss this year's Mercury transit, you'll have to wait until 2032 to catch one.

The show begins at 7:36 a.m. EST on the eastern coast of the U.S. and will already be underway when the sun rises west of the Rocky Mountains. Mercury will travel halfway across the sun by around 11:20 a.m. EST. From start to finish, the transit will last about 5.5 hours, finishing at 1:04 p.m. EST according to NASA.

If skies are clear, the transit will be visible from most of North America; parts of Europe, Asia and Antarctica; and all of South America and Africa, Live Science sister site Space.com reported.

Spotting the tiny, swiftly moving planet requires a telescope or binoculars. However, any viewing device that points directly at the sun must be fitted with protective solar filters to prevent serious eye damage. Disposable eclipse glasses should never be used with binoculars and telescopes; magnifying lenses increase sunlight's destructive power and can melt eclipse glasses' flimsy filters, as demonstrated in a video shared to YouTube in 2017 by journalist and photographer Vince Patton.

The last Mercury transit took place in 2016, and NASA's Solar Dynamics Observatory (SDO) captured unprecedented images of the event, at a higher resolution than ever before. But the transit isn't just an awe-inspiring spectacle; it has scientific importance, too. When Mercury is positioned directly in front of the sun for hours at a stretch, researchers are able to study the planet's exosphere, a very thin atmosphere of gases, to determine their distribution and density, NASA scientist Rosemary Killen said in a statement.

"Sodium in the exosphere absorbs and reemits a yellow-orange color from sunlight, and by measuring that absorption, we can learn about the density of gas there," Killen said.

To find out more about Monday's Mercury transit and where you can watch it, including live webcast views on the day of the transit, visit Space.com.