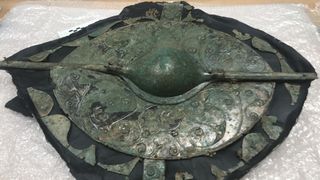 About 30 inches (75 centimeters) in diameter, this shield was found in July 2018; but it wasn't until conservation was complete that its decorations and details could be seen.
(Image: © Map Archaeological Practice )

Inside a 2,200-year-old grave, archaeologists have discovered a stunning Iron Age shield, along with a chariot and two ponies buried in a leaping pose, in what archaeologists are calling one of the most important discoveries in the U.K.

A team of archaeologists led by Paula Ware of MAP Archaeological Practice Ltd. discovered the grave near Pocklington, England. The shield, which is about 30 inches (75 centimeters) across, "was discovered in July 2018, but its true glory was only revealed recently once conservation was completed," Ware told Live Science. The restoration revealed that the shield is decorated with a series of complex swirls and what looks like a sphere protruding from its center.

The grave also held the remains of a man who was in his 40s when he died. In addition to the chariot and two "leaping" ponies, the site was filled with several pig joints and a feasting fork attached to a pork rib, Ware said. Two small brooches — one made of bronze and the other of glass — were also found in the tomb. The elaborate nature of the burial indicates that the deceased man must have been "a significant member of his society," Ware said.

Ware agreed with what other media outlets have suggested about the significance of the find: It is one of the most important ancient discoveries ever made in the U.K. "Yes, especially as it has been excavated under modern archaeological conditions," she told Live Science.

Ancient chariots are not altogether uncommon in burials. A 2,000-year-old Thracian chariot was discovered in 2008 alongside the bones of two horses and a dog in what is now Bulgaria, Live Science previously reported. The practice of burying noblemen near chariots in Bulgaria was especially popular during the time of the Roman Empire, which lasted from about 2,100 to 1,500 years ago. Some 2,500 years ago, a Celtic prince in what is today France was buried in a lavish tomb complete with gorgeous pottery, a gold-tipped drinking vessel and … a chariot, Live Science reported. Archaeologists announced in 2014 that they had discovered a 4,000-year-old burial chamber holding two four-wheeled chariots and plenty of treasures in the country of Georgia, in the south Caucasus.

The newfound grave and chariot were discovered when the archaeological team was excavating an area where homes were going to be built. The researchers plan to submit a paper describing the finds to a scientific publication.