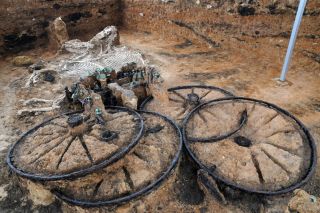 This 2,000-year-old wooden chariot was buried alongside the remains of two horses and a dog, as well as the remains of a nobleman from Thrace, in what is now Bulgaria.
(Image: © UBB/Veselin Ignatov)

The photo of an ancient Thracian chariot alongside the bones of two horses and a dog has quickly risen to the top of Reddit today (Oct. 13), with more than 65,000 likes. But what is so exciting about the discovery, and who was buried within the chariot?

A team of archaeologists led by Veselin Ignatov, of the Istoricheski muzej Nova Zagora, a museum in Bulgaria, discovered the 2,000-year-old wooden chariot in 2008. It was covered in bronze and would have been decorated with scenes from Thracian mythology that are now difficult to see. Its exact age is uncertain and may be closer to 1,800 years old.

In 2009, Ignatov and his team also found a brick tomb, containing the remains of a man dressed in what appears to be armor, near the chariot. The man was buried with several items, including gold coins, gold rings and a silver cup showing a depiction of the Greek god Eros (the Roman equivalent was Cupid). He would have been a nobleman or possibly even a ruler who lived in ancient Thrace, in what is now Bulgaria. [In Photos: Early Bronze Age Chariot Burial]

Chariot burials like this are commonly found in Bulgaria. The practice of noblemen being buried near chariots seems to have started in Bulgaria about 2,500 years ago, Ignatov wrote in a paper published in 2007 in the journal Archaeologia Bulgarica. He noted that the practice was especially popular during the time of the Roman Empire, which lasted from roughly 2,100 to 1,500 years ago.

Though the people of some other regions of the Roman Empire also sometimes buried their noblemen near chariots, this practice was "by far most popular and long-standing in Thrace," Ignatov wrote in the journal article. "In all cases, the chariots represent prestige, power and authority," Ignatov wrote, noting that the chariots were probably intended to be used by the deceased in the afterlife.

Because chariot burials are common in Bulgaria, and sometimes have rich burial goods, looters try to find them and sell the artifacts on the black market, Ignatov noted. This means that archaeologists in Bulgaria are often racing to discover and excavate chariot burials before looters find and pillage them.

Since the archaeologists excavated this chariot burial before looters got to it, the artifacts can be displayed publicly in a museum, and pictures showing the chariot burial are being shared publicly on Reddit and other forms of social media.