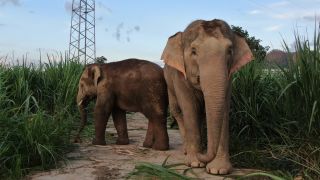 A photo that circulated widely on Twitter in March allegedly showed a pair of Asian elephants in rural southwestern China that had blissfully "passed out" in a tea garden after raiding a village and drinking too much human-made alcohol.

While humans carry out social distancing, a group of 14 elephants broke into a village in Yunan province, looking for corn and other food. They ended up drinking 30kg of corn wine and got so drunk that they fell asleep in a nearby tea garden. 😂 pic.twitter.com/ykTCCLLCJuMarch 18, 2020

The story (and photos) of elephants raiding a remote village in Yunnan province and getting drunk, first surfaced on Weibo, the Chinese microblogging platform, Chinese news outlet Xinhua News reported on March 16.

A group of 14 elephants did, in fact, enter several villages in Yunnan province's Menghai County on March 11, damaging roofs and overturning wine jars, according to official reports.

But did the elephants get drunk?

"It was difficult to confirm" if the elephants drank any of the alcohol that they spilled, said Long Yunhai, deputy director of the Forestry and Grassland Bureau of Menghai County, according to Xinhua News

One more elephant incident took place on March 14; nine elephants entered another village, also in Menghai County, where they damaged several buildings and broke solar energy structures. But the viral photos of the so-called drunken elephants were not taken during any of the recent "raids," Yunhai said. In fact, the photo of the elephants in the field previously appeared online on June 19, 2019, in an article about elephant management in China, according to AP News.

"The photo was credited to the Yunnan Province Elephant Management Bureau, which researches elephants. There’s no mention of the elephants being drunk," AP News reported.

That image also accompanied an article published online in December 2019 by the news outlet Huanbao World, about the opening of an Asian elephant research center in Kunming, which is also in Yunnan province.

The photo of the snoozing elephant pair appears to be a still image taken from a drone video; vegetation around the elephants matches that in the photo of the standing group, AP News says. Markings on the "drunk" elephants also match those in the larger group, suggesting that this image was captured at the same time, and does not represent the marauding elephants that were reported in Menghai County in March, according to AP News.

Forestry officials in Yunnan province said that the elephants in the footage were resting, but were not drunk, Xinhua News reported.