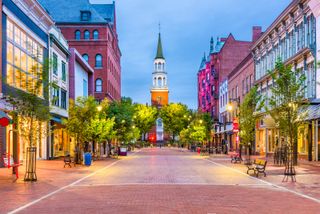 Vermont is reporting 818 confirmed cases of COVID-19, 24 hospitalizations and 30 deaths associated with the disease according to the state's health department. (An additional 25 hospitalized patients are suspected of having the disease, but it has not been confirmed with a test.) A total of 12,981 tests have been conducted as of April 20, and 28 people are being monitored.

Though Vermont has logged relatively few cases compared to other states, it is also one of the least populous states in the country. The number of confirmed U.S. coronavirus cases is around 788,000.

—On Monday (April 20), a working group of Vermont experts has found that antibody tests that are currently available are not reliable enough to be rolled out widely in a way that would inform either individual or population-level behaviors, according to the department of health.

—The department of health recommends that everyone wear cloth face coverings when outside, according to the daily update.

—On Friday (April 17), Gov. Phil Scott said some businesses would be allowed to take small steps towards reopening on Monday (April 20). Low-contact jobs, such as attorneys, realtors, and property appraisers could begin to return to offices in crews of two or less. Similarly, construction workers and property managers could return to work on crews of two. However, they must maintain social distancing of 6 feet (1.8 meters) at all times, vtdigger.com reported. Garden and construction supply stories can also reopen, but must maintain a skeleton staff and facilitate purchases via phone calls or online orders and curbside pickup, Scott said. Farmers' markets will reopen on May 1, Scott said.

—On Wednesday (April 15), health commissioner Dr. Mark Levine said case counts suggest Vermont is at its peak. However, social distancing needs to continue in order to maintain that positive momentum.

—Twenty-seven inmates who had been at the Northwest State Correctional Facility who tested positive for COVID-19 were moved to another facility in St. Johnsbury, vtdigger.com reported. People in the community are not happy about that movie, according to vtdigger.com.

—Vermont is extending its state of emergency, including the "Stay Home, Stay Safe" order put in place by Gov. Phil Scott, according to an update from the state health department.

—The state is implementing new rules to help contain the spread in places that are vulnerable to rapid and explosive spread of the virus. When anyone tests positive for COVID-19 in certain high-risk settings, such as a nursing home, correctional facility, residential home for those with disabilities, residential treatment center, a psychiatric care facility or an assisting living facility, everyone in the facility will be tested for the disease, according to the health department. Currently, blanket testing is being conducted at Vermont Veteran’s Home in Bennington and Decker Towers, a senior apartment complex in Burlington, vtdigger.com reported.

"The challenge will be making sure we have a supply pathway to obtain more testing materials to keep using them," Levine said at a news briefing.

—Most of those who have died of COVID-19 in Vermont have been older. However, younger people are testing positive for the virus; 13 COVID-19 cases were in teenagers, 74 of the cases were in those in their 20s and 86 cases have been reported in people in their 30s, health department data shows.

—Vermont will approach its COVID-19 peak in the next few weeks, Gov. Phil Scott said on Monday (April 6). "We must be prepared for things to get worse before they get better," Scott said in a news briefing.

—The Vermont National Guard is preparing two additional sites to serve as overflow facilities to handle a spike in new COVID-19 diagnoses across the state, one at the Champlain Valley Exposition in Essex Junction and one in Rutland County, vtdigger.com reported. Three other sites were set up in Burlington, Barre and St. Albans. A total of 800 beds are available at these sites. The National Guard will also assist in screening patients at the University of Vermont Medical Center, according to the Burlington Free Press, the Burlington Free Press reported.

—Vermont health officials are seeing an increase in the percentage of tests that are coming back positive for COVID-19. Dr. Mark Levine, the state's health commissioner, said  in a news briefing April 1 that earlier in the pandemic, about 5% of tests were coming back positive. Now, that percentage is hovering around 10 to 12%, . That likely means the virus is becoming more prevalent in the population. Levine said

—Cases of COVID-19 have now been reported at eight senior facilities in the state, according to vtdigger.com. All staff at one of the hardest-hit facilities, Burlington Health and Rehab facility, are being tested for the virus starting April 1. The affected centers are:

—Vermonters with a medical background are being urged to join the state's Medical Reserve Corps. The corp is seeking those with medical training or experience in healthcare administration. They may also need drivers, food service professionals, construction workers, IT workers, and security, according to vtdigger.com

—As states like New York and New Jersey report skyrocketing case counts, Vermont is trying to prevent the introduction of imported cases by requiring that visitors self-quarantine for 14 days. The state also "strongly discourages" any travel from hotspots such as New York, in line with Centers for Disease Control and Prevention (CDC) guidelines.

"In light of the significant risk posed by the further spread of this dangerous virus to Vermonters and the viability of Vermont’s health care system, this new order directs residents and non-residents coming from outside the state for anything other than an essential purpose to home-quarantine for 14 days and strongly discourages travel to Vermont by those located in COVID-19 'hot spots,'" according to a statement from the governor's office.

—The state has created its own "pop-up" testing center in Putney at Landmark College, which will be open from 8 a.m. to 3 p.m., depending on supply availability, according to vtdigger.com. That follows on the heels of the state rolling out a wider testing scheme, which allows people with mild or moderate symptoms to be tested. (People will still need a doctor's orders to get the tests conducted.)

—Outbreaks are currently being reported at two senior facilities. At least four deaths have occurred at the Burlington Health and Rehab long-term care facility, according to Vermont Public Radio. State officials have requested that the Centers for Disease Control and Prevention assist them in investigating the outbreak, according to VPR. And at least three people have died in connection with an outbreak at the 104-unit apartment complex known as the Pinecrest at Essex senior living facility, according to vtdigger.com. At least 10 others are being monitored after they had "intense" exposure to those who tested positive. The state has no plans for widespread testing of everyone at the facility, however.

When will the outbreak peak in Vermont?

It's very difficult to know when an outbreak has peaked until it's over, as a flattening out could be a momentary blip, or the point at which cases decisively go down. On Wednesday April 15, officials with the state said they think Vermont may be at its peak. However, they are "cautious" about that interpretation.

"The most recent modeling study showed this week would actually be our peak," Health Commissioner Dr. Mark Levine said at a news briefing last week.

Signs of a reduction in the peak: Fewer tests — about 5% — are coming back positive, as compared to 10% just a week ago, Levine said, as reported by Vermont Public Radio.

Last month, a separate state model made a considerably more dire projection. That model, released by Mike Piecak, the Financial Regulation Commissioner, suggests that in the likelier models, the state could reach its peak in mid-April and would require 211 intensive care unit (ICU) beds at the peak, exceeding the state's 135 bed capacity. The state would require 114 ventilators at the peak and currently has 93 on hand.

However, after social distancing measures went into effect in March, cases are no longer doubling as quickly and Vermont's trajectory is moving closer to the best-case scenario model conducted in mid-March, Piecak said.

Timeline of coronavirus in Vermont