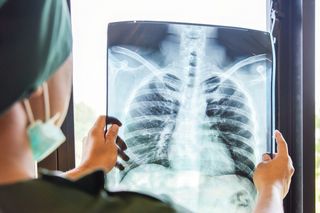 A teen in Canada may be the first person to develop "popcorn lung" due to vaping, according to a new report.

Although the teen is one of thousands of people to be sickened in a recent outbreak of vaping-related lung illness, his case is unique because of the type of lung injury he developed, the authors said.

The 17-year-old went to the emergency room after he developed a "severe, intractable cough," along with difficulty breathing and a fever, according to the report, published today (Nov. 21) in the Canadian Medical Association Journal (CMAJ).

The teen was previously healthy but reported that he had vaped every day for the last five months. He vaped a variety of flavored electronic cigarettes, which he purchased online, and often added THC to his vaping fluid, according to the report authors, from the Western University Schulich School of Medicine & Dentistry in London, Ontario, and the University Health Network in Toronto.

The teen's condition soon worsened, and he was admitted to the intensive care unit. His lungs were so damaged that he had to be placed on an extracorporeal membrane oxygenation (ECMO) machine, which pumps blood through an artificial lung outside the body.

Doctors conducted multiple tests for infections, but those exams all came back negative. However, imaging tests showed that the teen had bronchiolitis, which means that the smallest airways in the lungs, called bronchioles, are inflamed and obstructed.

That's when doctors suspected that the teen could have "popcorn lung," medically known as bronchiolitis obliterans, a rare condition in which the bronchioles become damaged and inflamed, often as the result of inhaling chemicals, according to the National Institutes of Health.

The condition gets its name from a cluster of cases that occurred more than a decade ago among workers at a microwave popcorn factory. The workers developed bronchiolitis obliterans after breathing in the chemical diacetyl, an artificial flavoring used in microwave popcorn.

Diacetyl has been found in e-cigarettes before; indeed, in 2016, the American Lung Association even warned about the risks of diacetyl in flavored e-cigarettes. But popcorn lung hasn't actually been connected with a case of vaping-related lung injury, until now.

The new case "may represent the first direct evidence" of bronchiolitis obliterans from e-cigarettes, Dr. Matthew Stanbrook, deputy editor at CMAJ, wrote in an accompanying editorial.

It's important to note that although doctors suspected popcorn lung in the teen based on imaging tests, the physicians were not able to confirm the diagnosis with a lung biopsy, as the procedure was deemed too risky for the patient.

Even so, the teen showed a different pattern of lung injury than is seen in other cases of vaping-related lung injury, also known as EVALI, the authors said. Specifically, EVALI typically involves damage to the alveoli, the small air sacs in the lungs, versus the bronchioles in the current case, the doctors said.

Still, the Candian teen ended up spending nearly 50 days in the hospital and continues to recover at home. It appears that he now has chronic damage to his airways and his exercise ability is limited, the authors said. The teen isn't using e-cigarettes, marijuana or tobacco products anymore.

Overall, the cases of EVALI described in the medical literature show "a variety of pathophysiological presentations and severity of disease," the authors wrote. In other words, the features that show up on lab tests and scans aren't the same for every patient. This variation may be due to a number of factors, including exposure to different chemicals within e-cigarettes and differences in the dose and temperature of the inhaled agents, the authors said.

So far, the vaping outbreak has sickened more than 2,100 people in the U.S. and there have been seven confirmed or probable cases in Canada, the report said.

Researchers at the U.S. Centers for Disease Control and Prevention have identified an additive called vitamin E acetate as a "strong culprit of concern" in the vaping outbreak in the U.S. However, other causes cannot be ruled out, and there may be more than one cause, Live Science previously reported.