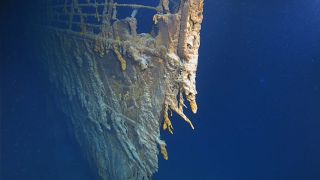 The bow of the RMS Titanic is doing well after 107 years, but a new expedition reveals that the rest of the ship is a little worse for wear.
(Image: © Atlantic Productions)

One-hundred-and-seven years after sinking to the bottom of the Atlantic Ocean, the ruins of the RMS Titanic continue to rapidly disintegrate into the sea, according to a team of ocean explorers who recently revisited the wreck for the first time in 14 years.

Led by Victor Vescovo — who set a new deep-diving record after piloting a submersible to the bottom of the Mariana Trench (and finding plastic trash there) in May — the team descended 12,500 feet (3,810 meters) to the Titanic's wreck site off the coast of Newfoundland in a series of five dives earlier this month. They found that the famous wreck has degraded considerably in the past 14 years, particularly near the officers' quarters on the ship's starboard side, resulting in the loss of some of the wreck's most iconic features.

"The captain's bathtub is a favorite image among Titanic enthusiasts, and that's now gone," Titanic historian Parks Stephenson said in footage filmed for an upcoming documentary on the expedition. "That whole deck house on that side is collapsing, taking with it the state rooms. And that deterioration is going to continue advancing."

First discovered in 1985, the wreck of the Titanic sits in two pieces some 370 miles (600 kilometers) south of Newfoundland. While the ship's king-of-the-world bow and many interiors remain well preserved, much of the wreck is collapsed, corroded and encrusted in "rusticles" of brittle, deteriorated metal.

A cocktail of natural forces — including salt corrosion, strong deep-ocean currents and hungry metal-eating microbes — is responsible for the wreck's rapid demise, researchers with the expedition said in a statement. Among those microbes is a unique species of rust-munching bacteria called Halomonas titanicae. That species was named for the ship in 2010, when researchers discovered a colony of the microscopic buggers on a rusticle that had been removed from the wreck in 1991. Henrietta Mann, one of the researchers who described the bacteria, predicted that the microbes could devour the entire Titanic shipwreck by 2030.

In its uneaten prime, the Titanic carried 2,224 passengers and crew on its maiden voyage from Southampton, England, to New York. The ship hit an iceberg late on the night of April 14, 1912, and sank to the bottom of the sea early the next morning. An estimated 1,514 people died.