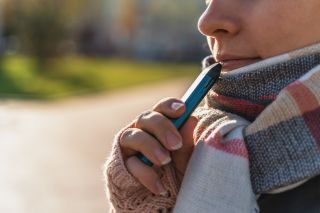 This year saw an alarming rise in the percentage of U.S. teens who vape marijuana, according to new findings from a government-backed survey.

The trend is all the more concerning in light of the recent outbreak of vaping-related lung illnesses, which have sickened more than 2,400 people across the U.S., with the majority of cases occurring in teens and young adults, according to the Centers for Disease Control and Prevention (CDC).

The survey, called Monitoring the Future, is conducted every year to track drug use among U.S. teens and is funded by the National Institute on Drug Abuse. This year, researchers gathered data from more than 42,000 U.S. students in the eighth, 10th and 12th grades.

The percentage of adolescents who reported vaping marijuana over the preceding 12 months in 2019 was 20% among 12th graders, 19% among 10th graders and 7% among eighth graders.

"As the number of adolescents who vape marijuana increases, so too does the scope and effect of any associated health consequences, which may include lung injury when using black market formulations," the authors, from the University of Michigan, wrote in their paper, published today (Dec. 18) in the journal JAMA.

Indeed, officials believe that vaping products containing THC, the active ingredient in marijuana, are playing a large role in the current outbreak of vaping-related lung illnesses. Around 80% of patients hospitalized with vaping-related lung illnesses reported vaping THC products. A substance known as vitamin E acetate, which is found in THC-containing vape products, has also been linked to the outbreak, according to the CDC.

"The rapid rise of marijuana vaping indicates the need for new prevention and intervention efforts aimed specifically at adolescents," the authors said.

Among the entire student population, the percentage who reported ever using mairjuana in an electronic cigarette device (vaping marijuana) increased from about 11% in 2017 to nearly 15% in 2018.

The rise in marijuana vaping may be due to several factors, including the increase in sales of a newer generation of e-cigarettes known as "pod mods" that use disposable or refillable "pod" cartridges (which can include THC cartridges), according to the authors of the second paper, also published today in JAMA. Makers of this style of e-cigarette have been criticized for marketing to young people.

Other factors behind the rise in teen marijuana vaping may include increased access to marijuana through informal sources, such as friends and family members, as well as a reduced perception that marijuana can be harmful, the authors said.

More studies are needed to assess the immediate and long-term health effects of vaping marijuana, they concluded.