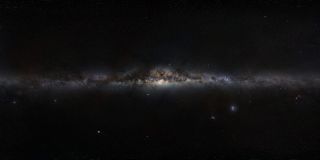 Measuring the Milky Way's mass presents some unusual difficulties, because we live in it. There's no way to stick galaxies on scales, so researchers typically "weigh" galaxies by tracing the movements of stars inside the galaxies, which can reveal how the galaxy's gravity is influencing those stars. But while anyone with a reasonably good telescope can spot the full Andromeda galaxy, most of the body of the Milky Way is hidden from us.

Nearby stars and dust clouds block faraway stars from our view, so researchers have to use more-sophisticated technological and statistical methods to infer what how our galaxy is moving and what it looks like from the outside. Also, our own solar system is moving in its own eccentric way through the galaxy, and so researchers have to correct for that in these measurements.

The new study relied on two key compilations of data. This information revealed how gas, stars and other material move in different parts of the Milky Way. Scientists can use this to produce a "rotation curve" that reveals how heavy the galaxy really is.

"The disk of our galaxy is spinning but not uniformly," said study co-author Fabio Iocco, an astrophysicist at Imperial College London. "Objects at different distances from the center of the galaxy go around that center at different speeds."

That "spinning force," he told Live Science, has to be balanced against the gravitational force of the galaxy at each point on the galactic disk. If it weren't, the galaxy would shred itself and stars and nebulas would be flung out into the intergalactic emptiness.

"If you do it for different distances, from the center until very far away, you get an estimate of the mass enclosed at increasing distances. So you can draw not only a total mass, but a mass distribution," Iocco said.

Of course, the Milky Way consists of more than just stars and gas and other visible things. Like with nearly all known galaxies, most of our galaxy's mass is locked up in an unseen halo of dark matter, exerting gravitational influence without forming any astrophysical objects that we can directly observe.

In this case, the researchers found that the dark matter's mass is equal to about 830 billion times the mass of our sun, or about 93% of the galaxy's total mass.

The researchers compared their results to past efforts to measure the galaxy's mass and found that their conclusions largely lined up nicely with past research. The paper, which has not yet been published in a peer-reviewed journal, was made available Monday (Dec. 9) to the arXiv database.