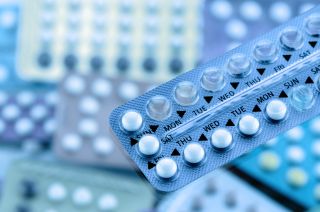 The once-a-month birth control pill is embedded into a starfish-like organic device and packed into a capsule that can be swallowed, according to the study, published today (Dec. 4) in the journal Science Translational Medicine.

Once the capsule reaches the stomach, it dissolves and releases the starfish contraption, which then extends out its six arms, gets lodged in place and slowly delivers hormones. The team, based at MIT, has tested its biomedical design on pigs and found it to be effective, but it has not yet been tested on humans.

"We were trying to find a way in which we could improve patient adherence to therapies," said lead author Ameya Kirtane, a senior postdoctoral fellow at MIT. Although the researchers initially developed their system to deliver drugs to treat HIV and malaria, they realized it could be adapted to deliver contraception. In the United States, around 12.6% of women use an oral contraceptive pill, according to the Centers for Disease Control and Prevention (CDC). But failure to take the pill at the same time every day or forgetting to take the pill can increase the risk of pregnancy.

Previous studies have shown that if a pill needs to be taken less frequently, people are more likely to take them, "so that's what really drew us to come up with a system that can be orally taken but much less frequently," Kirtane told Live Science.

The team members built their new design based on their previous work, but spent some time trying to identify new polymers — large molecules with special chemical properties — that could survive the treacherous churnings of the stomach for a couple of weeks.

After testing a number of polymers in simulated gastric fluid, they found that a type of polymer called polyurethane worked the best for the starfish arms and core. They also found that by changing the length of the polymer, they could change the amount of drug that it releases — either through diffusion (where it naturally leaves the contraption because it flows from an area of high concentration to one that's low) or degradation (where parts of the arms break down and release the drug).

The researchers loaded the six arms with levonorgestrel — the hormone found in "Plan B" emergency contraception and other types of hormonal birth control — and tested different versions of their once-a-month oral contraceptive in pigs. They found that the device effectively delivered the same amount of hormones as that of a daily pill and stayed in the pigs' bodies for up to 29 days. And, in contrast to other birth control methods such as IUDs, this once-a-month pill is "noninvasive" and "user-controlled," Kirtane said. So far, there haven't been issues with the contraceptive blocking other fluids or materials from passing through the stomach, he added.

Still, it's unclear if the results from the current study would apply to humans, so studies in people are a critical next step. Some of the researchers founded a biotech company called Lyndra Therapeutics, and with a grant from the Bill & Melinda Gates Foundation, they are now taking steps to test these pills on humans in clinical trials. The current study was funded by the Bill & Melinda Gates Foundation.

Pigs are more similar to humans than rodents, so the fact that the authors tested this birth control on pigs and not rodents "is very promising," said Christine Metz, professor at the Feinstein Institutes for Medical Research at Northwell Health in New York who was not a part of the study. That being said, "female pigs are different from female humans with respect to their reproductive cycles."

Pigs have slightly shorter reproductive cycles and they menstruate differently than female humans, she told Live Science. What's more, the mechanisms and rate of how pigs digest food and empty their stomachs is very different compared with humans, she said.

So "the translation of this [to humans] will require more research," she added. "As long as it is effective and has few side effects, it would be great for women to have another available option to choose as their form of contraception in the future."

Editor's note: This article was updated on Dec. 4 to include comments from Christine Metz.