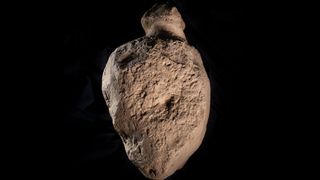 One of the stones uncovered in Finstown, Orkney that resembles a human form.
(Image: © Orkney.com)

Archaeologists discovered nine mysterious stone-carved objects scattered around an ancient hearth on the Mainland of Orkney, an archipelago off the coast of Scotland. The stones likely date back 4,000 years and resemble human figures, with large bodies, distinct necks and heads.

The stones, about 1.6 feet tall (0.5 meters), were found inside a structure made up of three cists — a kind of box-shaped burial structure — two hearths and a partial ring of holes filled with broken stones, according to a statement from the Orkney Research Centre for Archaeology (ORCA).

Archaeologists uncovered the structures in the settlement of Finstown while exploring an area designated for an electrical substation. Inside one of the hearths, they found a single stone structure that they nicknamed "Finstown Fella." They later uncovered eight other stone figures inside the same hearth.

It's not clear what the purpose of the building was, but the stone-carved objects were "important enough" that they were incorporated in the structure of one of the hearths and the foundation for one of the standing stones, according to the statement.

It's also not clear whether or not the stone figures, which likely date back to 2000 B.C., were deliberately made to resemble humans or were just shaped that way for another purpose. They were carved into the familiar form of a head, shoulders and body using a technique called pecking, which involves chipping the stone with a pointed tool, according to the BBC.

Some strongly resemble a human body, while others are flat and look more like upright stones used as weights. Those weights could have anchored ropes that helped hold up the roof of the building, according to the statement.

"It is very rare to find representations of people in prehistoric Orkney and when found, they are usually individual or in very small groups," Colin Richards, from the University of the Highlands and Islands Archaeology Institute, said in the statement. "If they are figurines, to find nine figures within one structure is very exciting."

The team also discovered signs that the ancient people worked the land 4,000 years ago. In a nearby trench, they found long crisscrossing marks likely made by ards, or prehistoric ploughs.