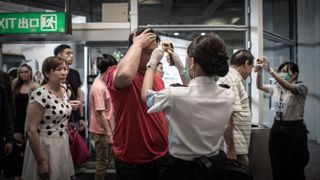 Passengers have their temperature checked at Hong Kong international airport in 2015 as part of preventive measures against the spread of Middle East respiratory syndrome (MERS).
(Image: © PHILIPPE LOPEZ/AFP via Getty Images)

As an outbreak of a new virus in China spreads to other countries, U.S. officials announced that they will start screening passengers arriving from China at select U.S. airports for symptoms of the viral infection.

Starting today (Jan. 17), people traveling from the city of Wuhan — where the outbreak originated — to the United States, will undergo screening at three U.S. airports: San Francisco (SFO), New York (JFK) and Los Angeles (LAX), according to a statement from the Centers for Disease Control and Prevention (CDC).

Right now, "we believe the current risk from this virus to the general public [in the U.S.] is low," said Dr. Nancy Messonnier, director of the CDC's National Center for Immunization and Respiratory Diseases. But "we know it's crucial to be proactive and prepared," said Messonnier, who noted that the U.S. has previously experienced outbreaks of similar viruses, including the outbreaks of SARS (severe acute respiratory syndrome) in 2002 and MERS (Middle East respiratory syndrome) in 2012.

So far, the virus — a new type of coronavirus — has sickened at least 45 people in Wuhan and has been linked to two deaths there, Messonnier said. Outside of China, the virus has been detected in two people traveling to Thailand and one person traveling to Japan.

As more countries are on alert for people with the virus, "I expect that we're going to see more cases," said  Messonnier, who added that it's "highly possible" there will be a case in the United States. "That's why we're moving so quickly" with screening, she said.

For the screening, officials will check people's body temperatures and ask questions about certain symptoms, Cetron said. Those who have a fever and other symptoms consistent with this viral infection will be further evaluated, and potentially tested for the new virus, known for now as 2019-nCoV.

Some coronaviruses infect animals, and in rare cases, they can jump from animals to humans, Messonnier said. In the current outbreak, most of those infected had either worked at or frequently visited a seafood and animal market in Wuhan, which does suggest that the virus spread from animals to people, she said. There is also evidence that under limited circumstances, the virus may spread between people.

With the Chinese New Year approaching, travel from Wuhan is higher now than at other times of the year, and the CDC expects to screen several thousands passengers across all three airports over the next few weeks, Cetron said.