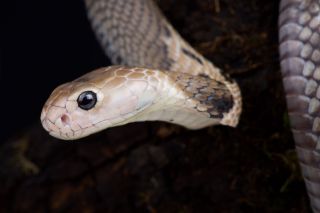 A new study suggests snakes may be the source of the new coronavirus causing an outbreak in China. Above, an image of Naja atra, a type of snake common in southeastern China.
(Image: © Shutterstock)

Editor's note: This article was updated on Jan. 23 to include discussion of the controversy around the new study.

As an outbreak of a new coronavirus continues to grow in China and spread to other countries, one question remains: Where did the virus come from? Now, a controversial new study points to a slithering suspect: snakes.

However, some experts have criticized the study, saying it's unclear if coronaviruses can indeed infect snakes.

Coronaviruses are a large family of viruses — some cause illness in people, while others infect animals, including camels, cats and bats, according to the Centers for Disease Control and Prevention (CDC). In rare cases, coronaviruses in animals can evolve to infect people and then spread between people. This was the case with SARS and MERS (Middle East respiratory syndrome) and appears to be the case with 2019-nCoV.

In the new study, published today (Jan. 22) in the Journal of Medical Virology, the authors found that 2019-nCoV appears to be a mix, or recombination, of two coronaviruses — one that is known to infect bats and another coronavirus of unknown origin.

Next, the researchers further analyzed the genetic sequence of 2019-nCoV to look for patterns in the genetic code that may reveal the host that the virus infects. They considered several potential hosts, including marmots, hedgehogs, bats, birds, humans and snakes. Based on this analysis, they concluded that 2019-nCoV may have come from snakes.

The findings "suggest for the first time that snake is the most probable wildlife animal reservoir for the 2019-nCoV," the authors wrote.

The two types of snakes common to southeastern China (where the outbreak originated) are Bungarus multicinctus, or the many-banded krait, and Naja atra, or the Chinese cobra, the authors said.

However, researchers not involved in the study questioned the findings.

The study also found that, as a result of genetic recombination, 2019-nCoV has a change in one of its viral proteins that recognizes and binds to receptors on host cells. This recognition is a key step in allowing the virus to enter cells, and the change in this specific protein may have contributed to 2019-nCoV's ability to hop species, the authors said.

They also noted that snakes were among the animals sold at the Huanan Seafood Wholesale Market in Wuhan, where many initial cases worked or visited before they became ill.

Still, more animal studies will be needed to confirm the findings, the authors said. Researchers not involved in the study also called for further field and lab work to identify the source of the virus, according to Nature News.

So far, there are more than 500 confirmed cases and 17 deaths linked to the virus in China, according to the BBC. The virus has been detected in travelers to Thailand, Japan, South Korea and Taiwan, as well as a resident of the United States who had recently visited Wuhan.

The World Health Organization (WHO) held a committee meeting today to determine whether the virus constitutes an international public health emergency, a distinction that was given during the swine flu outbreak of 2009 and the Ebola outbreak of 2014. However, the committee did not reach a final decision on this topic, and will reconvene tomorrow.

"The decision about whether or not to declare a public health emergency of international concern is one I take extremely seriously and one I am only prepared to make with appropriate consideration of all the evidence," Tedros Adhanom Ghebreyesus, the director-general of WHO, said in a news conference Wednesday (Jan. 22).