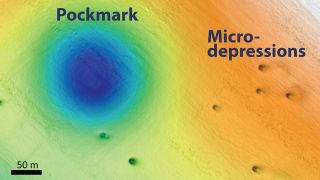 SAN FRANCISCO — On the sea bottom off the coast of central California lies a vast field of mysterious pockmarks. The field spans about 500 square miles (1,300 square kilometers), and there are approximately 5,200 of these strange pits, which on average measure about 600 feet in diameter (175 meters) and 16 feet (5 m) deep.

No one knows how these mystery holes appeared, but they likely made their first appearance 400,000 years ago, according to research presented on Dec. 9 at the annual meeting of the American Geophysical Union (AGU) here by Charles Paull, a marine geologist and senior scientist with the Monterey Bay Aquarium Research Institute (MBARI).

And when Paull’s team sent diving robots into the ocean depths to map the pockmarks, they made an unexpected discovery. Dotting the sea bottom around the pockmarks were thousands upon thousands of much smaller holes, or microdepressions, measuring only 36 feet (11 m) wide and 3 feet (1 m) deep, on average. The microdepressions outnumbered the pockmarks by about three to one, meaning that the pockmark field holds roughly 15,000 of these smaller features that were previously undetected, Paull said at AGU.

Related: Dark Waters: The Most Mysterious Places on the Seas

Until about three years ago, this part of the seafloor near Big Sur was "a research backwater" with very little data showing what it looked like, Paull said. But marine researchers began investigating the region more closely after the area came under consideration for building an offshore wind farm.

The unusual pockmarks were first mapped from the sea surface by scientists with the National Oceanic and Atmospheric Administration (NOAA), MBARI and other agencies using sonar, but examining them at high resolution required MBARI's sonar-mounted diving robots — autonomous underwater vehicles (AUV), according to Paull.

The state-of-the-art NOAA tool can get resolution that's on the order of 10 meters. The diving robot can do 10 times better, achieving 1-meter resolution, he said.

At that higher resolution, the pockmarks were found to be smooth and nearly perfectly circular. The exceptional detail of these new views also revealed the microdepressions for the first time. They had steeper sides than the larger pits and had "tails" that trailed off in one direction, hinting that currents may have played a role in their formation, Paull explained.

"Many have substantial accumulations of debris, trash — whole plastic bags in some cases," Paull said.

"From what we know about the rate that sediments accumulate in this area that comes with C-14 [carbon-14] dating, this would indicate that the strata deposited at this level were deposited 400,000 years ago, which suggests these features have persisted through time," said Paull. What's more, the larger pockmarks haven’t changed for more than 50,000 years, Paull said.

The usual explanation for seabed pits such as these is that they are formed by flows of subsurface fluids or methane gases; this can create unstable conditions in the seabed that would be unsuitable for a wind farm, Paull said.

But the scientists saw no visual evidence of disturbance in the pits. And when they extracted sediment cores from inside the pockmarks and microdepressions and analyzed the water chemistry, they didn't find any chemical traces indicating the presence of methane or fluid.

"Both the pockmarks and the microdepressions that we found show no evidence of methane venting going on. So, the common model for pockmark formation is not working in this site," and more research will be required to determine what shaped these pits and pocks, Paull said at AGU.

For now, the mystery remains.