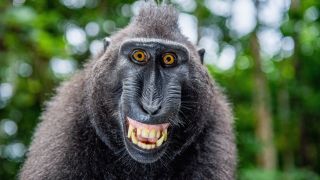 A macaque grins at the camera.
(Image: © Shutterstock)

A team of researchers has found an "engine of consciousness" in the brain — a region where, in monkeys at least, even a little jump start will make them wake up from anesthesia.

Consciousness is a mystery. We don't know for certain why creatures are sometimes awake and sometimes asleep, or which mechanisms in the brain are most important for a conscious state. In this new paper, though, researchers turned up some important clues. Using electrodes across the brains of awake and sleeping macaques, as well as macaques under different forms of anesthesia, the team found two key pathways in the monkeys' brains for consciousness. The researchers also found a specific brain region that seems to get those pathways going, like an engine they could start using some highly specialized jumper cables. That region is known as the central lateral thalamus.

But that doesn't mean they've found the seat of consciousness in the brain.

"It is unlikely that consciousness is specific to one location in the brain," said Michelle Redinbaugh, a graduate student in psychology at the University of Wisconsin-Madison and lead author of the paper, published Feb. 12 in the journal Neuron.

Past research has already shown that staying conscious involves activity spread across the whole brain, but her team's work demonstrates that the central lateral thalamus likely plays a key role, she said.

It's important to understand that, in the context of this study, "consciousness" refers more or less to being awake.

"The word 'consciousness' has many definitions," said Michael Graziano, a neuroscientist at Princeton University who wasn't involved in the study. "One way to think about consciousness is from a clinical perspective of wakefulness, arousal and responsiveness to stimuli. In that sense, sleeping people are not conscious, and people in a coma are also not."

And it's not entirely clear why or how people switch back and forth between those states. This study represents "elegant work" on that difficult topic, according to University of Minnesota neuroscientist Sarah Heilbronner, who also wasn't involved in the research.

That work is focused on a narrow question: What makes people become conscious?

"There is, however, a different conception of consciousness [that is] much more difficult to study: the subjective experience that comes with some instances of information processing in the brain, the 'what it feels like' component of our inner life," Graziano told Live Science. "Studies like the present one do not address this type of consciousness."

A trigger in the brain

In August 2007, researchers from Weill Cornell Medical College in New York City published a groundbreaking study in the journal Nature. One of their patients had spent months in a hospital in a "minimally conscious state" after a traumatic brain injury. The man was mostly unaware of his surroundings but sometimes became more conscious and active. Speculating that his condition might involve some "underactivation" of important networks in his brain, they implanted electrodes that stimulated his central thalamus — and reported significant improvements in his level of consciousness.

In the new monkey study, Redinbaugh and her team took things much further.

Using electrodes, the researchers sent small electric impulses into different areas of the monkeys' brains when they were asleep or sedated using several types of anesthesia. Mostly, the monkeys stayed asleep. But sending an impulse at a specific frequency to the central lateral thalamus woke the monkeys up — even from deep anesthesia — and allowed them to experience the world.

"The converging evidence from sleep and multiple forms of anesthesia is particularly impressive, since we know these have different mechanisms of action," Heilbronner said.

In other words, you don't fall asleep for the same reasons you lose consciousness under anesthesia, and different forms of anesthesia work in different ways.

But different forms of anesthesia and sleep "apparently converge on this circuit in their effects on consciousness," Heilbronner said.

Recording from the monkeys' brains as they went back and forth between conscious and unconscious states, the researchers narrowed down consciousness to two key ingredients.

One of these critical circuits carries sensory information from the thalamus to the cerebral cortex, the brain region that does many forms of complex thinking. Both that circuit and another pathway — one that "carries feedback about predictions, attention priorities and goals in the reverse direction" — needed to be active for consciousness to function, Redinbaugh said.

The central lateral thalamus, the researchers concluded, likely plays a key role in activating and maintaining those two pathways. It seems to act as a trigger.

This research isn't useful only from a purely scientific perspective, Redinbaugh said. Figuring out exactly how consciousness works could help improve anesthesia and lead to new treatments for people with consciousness disorders, like the man in the Weill Cornell Medical College study.

That link between the activity in the thalamus and the cortex is especially interesting for medical treatment, Heilbronner said.

Compared with the thalamus, "the cerebral cortex is also a more appealing target [for treatment]," she said. That's because noninvasive treatments, such as transcranial magnetic stimulation, can reach the surface of the cortex, but they can't reach the thalamus, which is buried deep within the brain, just above the brain stem. "Perhaps by building a circuit model like this one, we could noninvasively impact them both," Heilbronner said.

Despite the possibilities, there's reason to double-check the findings, saidLaura Fernandez, a neuroscientist at the Université de Lausanne in Switzerland.

"It's done in two monkeys. Very little sample," Fernandez told Live Science. It "would be nice to try in rodents with a higher-number sample." Researchers should also double-check the location of the electrodes placed in the brain, to make sure they were truly activating the central lateral thalamus and not other nearby brain regions, Fernandez added.

Still, she pointed out, the results fit neatly with those of a recent study in rodents; that paper, published in June 2018 in the journal https://vanilla.tools/livescience/articles/YGExvsCXa4AWnp5ubygZY9Nature Neuroscience, suggested there's a wakefulness "switch" somewhere in the thalamus.