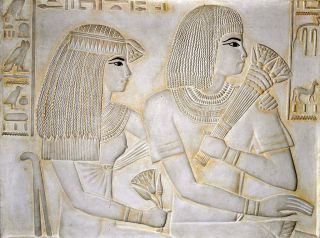 Merit Ptah was an ancient Egyptian physician, often revered as the world's first female doctor. She was thought to live nearly 5,000 years ago...but she likely never existed, according to new findings.

"Merit Ptah was everywhere," from online posts about women in STEM and popular history books to computer games, Jakub Kwiecinski, a medical historian and instructor at the University of Colorado's School of Medicine, said in a UC statement. "And yet, with all these mentions, there was no proof that she really existed."

So Kwiecinski spent some time searching through literature, looking for any such proof. He traced the first mention of Merit Ptah to a 1938 book describing the history of women in medicine around the world, written by medical historian, doctor and activist Kate Campbell Hurd-Mead.

Related: These 10 'Barbaric' Medical Treatments That Are Still Used Today

In her book, she identified the first woman doctor as Merit Ptah, and described how she lived during the fifth dynasty of Egypt's "Old Kingdom," or about 2730 B.C., and who was the mother of a high priest who was buried in the Valley of the Kings — an area on the western bank of the Nile where many pharaohs and important Egyptian nobles were given elaborate burials.

Inside this high priest's tomb was a picture and tablet that described the high priest's mother, Merit Ptah, as "the Chief Physician," Hurd-Mead wrote. But the burial ground in the Valley of the Kings didn't exist until Egypt's New Kingdom (1539 B.C. to 1075 B.C.), around 1,000 years after Merit Ptah was thought to have lived. What's more, though "Merit Ptah as a name existed in the Old Kingdom," there is no record of that name linked to a physician in any list of ancient Egyptian healers, even controversial ones, Kwiecinski said.

Peseshet became known from the 20th-century excavation of the tomb of her son Akhethetep, an Old Kingdom courier who was thought to have lived around 2400 B.C. His tomb, found in Giza (much farther north than the Valley of Kings), included a false door depicting his father and his mother and describing her as the "Overseer of Healer Women." Hurd-Mead likely confused Merit Ptah with Peseshet, Kwiecinski said.

"Unfortunately, Hurd-Mead in her own book accidentally mixed up the name of the ancient healer, as well as the date when she lived, and the location of the tomb," Kwiecinski said. "And so, from a misunderstood case of an authentic Egyptian woman healer, Peseshet, a seemingly earlier Merit Ptah, 'the first woman physician,' was born."

This ancient Egyptian healer's story shows how erroneous historical accounts can easily spread after being created in amateur historian circles, Kwiecinski wrote in the paper describing his study, which was published Nov. 22 in the Journal of the History of Medicine and Allied Sciences. But it also shows how important role models have been for women entering science and medicine, he wrote.

"Even though Merit Ptah is not an authentic ancient Egyptian woman healer … she is a very real symbol of the 20th-century feministic struggle to write women back into the history books, and to open medicine and STEM to women," he said.