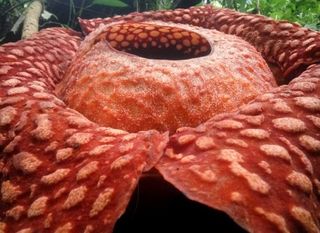 The giant orange "corpse flower" is in bloom for one week only. (Plug your nose.)
(Image: © West Sumatra BKSDA/AFP / Handout)

Proving that 2020 is going to be a year of mixed blessings, conservationists in Indonesia have discovered the largest-ever blooming flower — on a parasitic plant that literally smells like death.

The record-setting flower's name is Rafflesia tuan-mudae, though it's sometimes referred to as a corpse flower for the unholy, rotting-meat stink it emits when in full bloom. (Several species of stinky tropical flowers share this title.) According to AFP.com, the large orange flower's petals spread a whopping 3.6 feet (111 centimeters) in diameter, surpassing the previous species record of 3.5 feet (107 cm), which was set by a Rafflesia bloom in West Sumatra several years ago.

The corpse flower is considered one of the world's largest flower species, making this stinky specimen one of the largest flowers ever measured. The bloom will last about a week before it closes up again, Sumatran conservationist Ade Putra told the AP.

Related: The Most Disgusting and Deadly Flowers

Contrary to its name, the corpse flower is actually a parasite that makes its home on a tropical genus of grape vine called tetrastigma. Once a corpse bud takes root in an unsuspecting vine, it grows for about nine months before unfurling into a giant orange flower. The flower stays in bloom for about a week, attracting flies with its signature stench; properly seduced ones then carry off the flower's pollen to help spread that corpse-y goodness to other vines.

If you've heard of corpse flowers before, it may be thanks to one that bloomed in the New York Botanical Garden in 2016, following an excruciating 10-year growth period. (A stinker of the same species bloomed in the San Francisco Conservatory of Flowers in 2018, too.) This species of parasitic flower, known as Amorphophallus titanum (a name that literally translates to "giant misshapen phallus"), can grow to between 6 and 12 feet (2 to 4 meters) tall before blooming. When the time comes, the flower only opens for about 24 to 36 hours before closing again — a brief window that is either entirely too fleeting or far too long, depending on your feelings about rotting-meat stench.