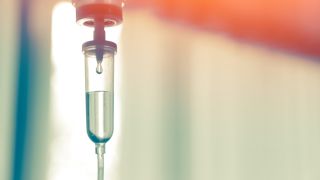 The anesthetic ketamine shows promise as a rapid treatment for difficult-to-treat depression, but scientists don't know exactly how it works.

Now, a small study hints that, among other effects, ketamine may activate a specific receptor in the brain that interacts with serotonin, a brain chemical implicated in many mood disorders. One caveat: The study included just 30 individuals.

Experts told Live Science that the study would have to include more than 100 people, if not several hundred people, to draw firm conclusions about where serotonin fits in the complex chain reaction triggered by ketamine in the brain. "Unfortunately, you don't get a really clear answer with really small studies," said Dr. Gerard Sanacora, director of the Yale Depression Research Program, who was not involved in the research.

That said, the study, published June 1 in the journal Translational Psychiatry, was "well designed" and offers interesting questions for future investigation, Sanacora added. By clarifying how and whether the antidepressant effects of ketamine depend on serotonin, for instance, scientists could develop new medications that behave similarly to ketamine but minimize the risks of the "dirty," and potentially addictive, drug.

The case for serotonin

Once known for its legal use as an anesthetic in hospitals and its illicit use as a club drug called "Special K," ketamine has gained traction in recent decades as a new way to treat depression.

In people whose depression does not improve with standard treatments, such as selective serotonin reuptake inhibitors (SSRIs), an infusion of ketamine could potentially improve their symptoms within hours or days, Live Science previously reported. SSRIs can take weeks or longer to take full effect, by comparison, and that's only when they work. While exciting, the fast-acting nature of ketamine has yet to be explained.

Studies indicate that ketamine blocks receptors for glutamate, a brain chemical that plays roles in mood regulation and generally works by exciting brain cells, pushing them to send electrical signals. "I call it the 'juice of the brain' — it's a stimulating neurotransmitter" that helps direct activity throughout the brain, said Dr. Alan Schatzberg, a professor of Psychiatry and Behavioral Sciences at Stanford University School of Medicine, who was not involved in the study.

In addition to glutamate receptors, ketamine may also interact with opioid receptors, either directly or indirectly, Schatzberg added. In a 2018 report published in The American Journal of Psychiatry, Schatzberg found that the beneficial effects of ketamine disappear in patients given naltrexone, a drug that blocks opioid receptors. While he said he suspects that opioid activity may be critical to how ketamine works as an antidepressant, opiates alone "might not explain" all the nuanced effects of the drug.

"Ketamine has a broad mechanism of action — it does a lot of things," said lead author Dr. Mikael Tiger, a psychiatrist and researcher in the Department of Clinical Neuroscience at the Karolinska Institutet in Sweden. Given that existing antidepressants tend to amplify serotonin levels in the brain, Tiger and his co-authors aimed to see whether ketamine does something similar.

In mouse models of depression, the antidepressant-like effects of ketamine can be blocked by drugs that drive down serotonin levels in the animals, the authors noted in their report. Mice in a depression-like state spend more time hiding rather than exploring their enclosures, become immobile in stressful situations rather than struggling, and show less interest in rewards compared to other mice, among other symptoms. Ketamine's antidepressant-like effects can be restored with drugs that activate a specific serotonin receptor, known as serotonin 1B.

In people with depression, less binding occurs at 1B receptors than is seen in healthy individuals, namely within regions of the brain where reward processing and mood regulation take place, according to previous work by Tiger and others. The decrease in binding most likely stems from a decrease in the overall number of 1B receptors, the authors noted.

One study in monkeys, published in the journal Translational Psychiatry, hinted that ketamine might reverse this decline in 1B binding, thus restoring 1B activity to healthy levels; but similar research had not been conducted in humans. Until now.

Tiger and his co-authors split 30 volunteers with difficult-to-treat depression into two groups: one group received ketamine and the other took a placebo. Neither the patients nor doctors knew which substance each person received, but because ketamine causes mind-altering dissociative effects, everyone in the ketamine group "realized that they received active treatment," the authors noted. That said, "a surprisingly large" portion of the placebo group thought that they had also received ketamine, so it's unlikely that issues with “blinding” affected the results, they wrote.

Related: 10 facts every parent should know about their teen's brain

Before and after treatment, all the participants completed questionnaires about their depressive symptoms and received a positron emission tomography (PET) scan, in which small amounts of radioactive material are introduced into the body and imaged with a special camera. By choosing a radioactive tracer that latches onto 1B receptors, the authors could assess whether the number of receptors changed in response to ketamine.

"PET … is the best method to quantify a certain protein in the living human brain," including different types of receptors, Tiger told Live Science.

The authors expected that ketamine would boost 1B binding across several regions of the brain, but overall, binding did not dramatically differ between the two groups. Again, binding is thought to reflect the number of available 1B receptors. But when the authors analyzed specific brain regions, they found that, compared with the placebo, the ketamine group showed a higher number of available 1B receptors in the hippocampus, a hub of emotional processing also involved in learning and memory.

Increased binding in another region, called the ventral striatum, correlated with improved symptoms in the ketamine group, although the total instances of binding only differed slightly from the placebo group. Those in the ketamine group who had the fewest 1B receptors in this region, at baseline, showed the greatest improvement in symptoms.

While the finding "wasn't incredibly strong," statistically, it does corroborate earlier studies that the serotonin 1B receptor plays some role in depression and may respond to ketamine treatment, Schatzberg told Live Science. "There's something there with serotonin, but it's a bit elusive," and the same goes for conventional antidepressants that alter serotonin levels, he said.

Once activated, the 1B receptor sets off a chain reaction that increases dopamine levels in the reward system, an effect that could theoretically ease symptoms of depression, Tiger said. This potential mechanism could be investigated in larger studies, he said. "With these things, it all comes down to sample size," Sanacora told Live Science.

Even the small study serves as a fertile ground for future research, though, which could help scientists design drugs that behave like ketamine, but without the potential risks, Sanacora added.

Ketamine can temporarily strain the cardiovascular system, and the dissociative effects can disturb people, so patients receiving the treatment require close monitoring. Moreover, ketamine poses a high risk for drug abuse, depending on the dose and route of administration, and the way it interacts with the opiate system underscores the need for caution, Sanacora said.

In developing a safe alternative, scientists will need to understand how ketamine works with the brain "as a whole," as the antidepressant effect likely arises from several sources, he said.