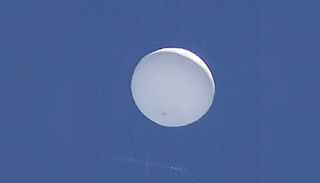 An unidentified flying object (UFO) was seen above Aoba Ward in Sendai, Japan, on the morning of June 17, 2020.
(Image: © STR/JIJI PRESS/AFP via Getty Images)

It's not a bird. It's not a plane. And it's not an alien. (It's never an alien, from planet Krypton or otherwise.)

Still, the origin of a strange, balloon-like UFO that appeared in the sky over the city of Sendai, Japan, yesterday (June 17) around 7 a.m. local time, remains a mystery a full day after its sudden arrival. The object looked like a large white, unmanned balloon attached to two crossed propellers, according to news reports. The UFO lingered in the sky, largely motionless, for several hours before drifting over the Pacific Ocean, AFP reported.

WATCH: A balloon-like object in the sky over northern Japan sparks debate on social media pic.twitter.com/xV8xTz8iweJune 17, 2020

While a weather balloon seems like the obvious explanation (they are widely available for purchase), a spokesperson from the Sendai bureau of the Japan Meteorological Agency told AFP that "it's not ours." In his daily press briefing later that day, Japan's Chief Cabinet Secretary Yoshihide Suga also denied any knowledge of the balloon's origin, according to AFP.

Suga also tried to pop any rumors that the balloony UFO was the dastardly instrument of a foreign government. Earlier on Wednesday, social media speculation about the object ran rampant, giving air to theories that the UFO was distributing North Korean propaganda or even spreading the novel coronavirus.

The evidence for either of these theories — much like the balloon itself — looks like a big, fat goose egg. For a truly head-scratching UFO mystery, grab a tinfoil hat and take a look at these eerie airborne videos recently declassified by the U.S. government.