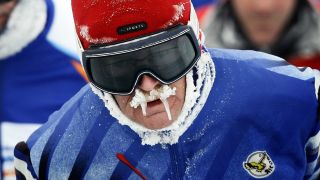 "Check the snotsicles on this!" an environment correspondent for the BBC gleefully exclaimed, in a video recently captured in frigid Antarctica. A frozen icicle of moisture, also known as a "snotsicle," hung from the reporter's nose, extending all the way down to his lower lip.

When temperatures fall far below freezing, runny noses can easily develop snotsicles, according to polar researcher Juliane Gross, an associate professor with the Department of Earth and Planetary Sciences at Rutgers University in New Jersey. Gross documented "the day of the snotsicles" during an expedition in Antarctica with the Antarctic Search for Meteorites (ANSMET) project in 2017 and 2018, describing them on the team's field season blog.

"We even had a snotcicle that the wind swung up while still pliable, got attached to the goggles and then froze," Gross recalled in the blog. "It was very impressive."

But how does a snotsicle form, and what does it feel like to grow one?

Related: Where does all my snot come from?

Cold weather causes runny noses in about 50% to 90% of people and is known as cold-induced rhinitis, according to the Faculty of Medicine at the University of Queensland (UQ) in Australia. Passage through the nose warms and moistens the air we breathe before it reaches the lungs; if air is very cold and dry, the nose produces more liquid to humidify it. When this system kicks into overdrive and there is more moisture than the inhaled air can absorb, the excess drips out, according to UQ.

In places like Antarctica, where temperatures with wind chill can plummet to minus 76 degrees Fahrenheit (minus 60 degrees Celsius), snotsicle formation is inevitable, Gross told Live Science in an email. During her fieldwork there, average temperatures were typically somewhere between minus 4 F and minus 40 F (minus 20 C and minus 40 C), which meant that "some part of your body is always cold," she said. "It is like tiny teeth sinking into your skin."

Under such extreme conditions, nasal drips begin to freeze immediately, Gross explained. And just as stalactites and icicles form from accumulated moisture drips, "the same happens at your nose with the dripping snot," she said.

But if you're performing fieldwork with a team, you can always admire your colleagues' snotsicles.

"Sometimes when the snotsicles are very thin, the wind blows them, and you end up with funny shapes that hang off your nose. Usually they break off when you look down to recover a meteorite, simply because the long, icy snotsicle now collides with your jacket. That doesn't hurt at all," she said.

"When that happens you hope that the snotsicle doesn't hit the meteorite you meant to recover, otherwise it needs to be written down in the field notebook, because it could be a source of organic contamination," Gross said.

Related: Why is snot green?

Another snotsicle hotspot is Manitoba, Canada. The region made international headlines for being "colder than Mars" on Dec. 31, 2013, when temperatures in the city of Winnipeg famously dipped to minus 36 F (minus 38 C). By comparison, temperatures on Mars' surface that day dropped to only minus 20 F (minus 29 C), the Manitoba Museum wrote in a tweet.

Even if Winnipeg's winter chill isn't always that numbingly cold, its temperatures are still low enough to produce an annual bumper crop of snotsicles. Depending on the individual and the wind conditions, snotsicles can form in a variety of shapes, said Christopher Beuvilain, founder of the Frosty Face project, which celebrates the icy formations that frequently adorn the faces of Winnipeg residents and visitors.

"With my beard I get a very messy buildup — 'the pumpkin' — because it looks like something my kids would carve for Halloween," Beuvilain told Live Science in an email. "The 'walrus' is quite common and looks like two tusks below the nostrils. The 'unicorn' is a single spire from the top lip, whereas 'groomed' looks almost as if it has been combed; this is common among people who bike without a face shield," he explained.

Photos on Frosty Face show that noses aren't the only features that accumulate icy crusts; there are plenty of ice-tipped mustaches and beards, as well as ice-enclosed eyebrows and eyelashes.

"It seems to affect everyone differently, almost as if it has a personality of its own," Beuvilain said. "I cannot seem to get 'manitoba mascara' (frosty lashes) no matter how long I am out — though I do get a decent buildup on my beard."

While this type of frost accumulation looks dramatic, it doesn't injure the skin because the bulk of the ice collects on facial hairs. Unlike frostbite, in which ice crystals form inside skin tissue and can cause severe damage, frosty facial bling is usually harmless.

"I cannot speak for all instances of frost covered faces, but in my experience, and with everyone who has sent me photos, there are no adverse effects from the frost," Beauvilain said. "This is very different from frostbite, which is a serious condition."