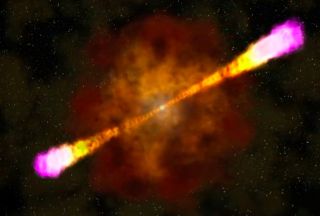 An illustration of a gamma ray burst, which, in a few seconds, can release as much energy as the sun does over the course of its lifetime.
(Image: © NASA's Goddard Space Flight Center)

Across the universe, some 7.5 billion light-years away, a dying star released some of the highest-energy light astronomers have ever seen. And these light particles, or photons, are helping astronomers understand how these particles are boosted to such extreme energies.

The astronomers found the ultrahigh-energy photons while they were looking at an event called a gamma-ray burst, or GRB. Thought to result from the collision of neutron stars or the collapse of a massive star, gamma-ray bursts appear suddenly, sometimes for only for a fraction of a second. One of these fleeting bursts can release more energy than the sun would generate over its entire life. These events are hard to catch, but an afterglow follows the burst. The light from the afterglow is dimmer but lasts longer, allowing astronomers to measure it in detail.

On Jan. 14, 2019, one such gamma-ray burst, named GRB 190114C, was discovered by two space telescopes through an automated system. Within 22 seconds, astronomers on Earth directed their ground-based telescopes to measure the afterglow following the event.

"We have been looking for [such an event with high-energy particles] for longer than 20 years," Razmik Mirzoyan, the spokesperson for the Major Atmospheric Gamma Imaging Cherenkov Telescopes (MAGIC) collaboration and co-author on the new study, told Live science. That they were able to find this one, Mirzoyan said, "was not mere luck, it's just persistence."

In astronomical terms, the event was relatively near, which allowed astronomers to measure the afterglow over a large range of wavelengths. Over the next 10 days, the scientists gathered data from six satellites and 15 ground-based telescopes that detected radiation in wavelengths ranging from radio to ultraviolet light.

Analyzing the measurements from the first tens of seconds after the burst, astronomers found photons with energies of trillions of electronvolts — that's trillions of times the energy of the typical photons coming from the sun.

While photons with energies exceeding 1 trillion electron volts have been detected beforefrom other astrophysical sources such as supernovae remnants, none were known to have originated from a GRB.

The multiwavelength data helped the astronomers establish how the particles were energized. Lower-energy photons had been released by particles spiraling around magnetic fields in a process known as synchrotron radiation. By contrast, the record-breaking, ultrahigh-energy photons were sped up through collisions with high-energy electrons — a variation on a mechanism scientists call inverse-Compton scattering. The findings confirm theories about GRBs and help astronomers understand the physics of these bizarre bursts.

"After more than 50 years since GRBs were first discovered, many of their fundamental aspects still remain mysterious," Mirzoyan said in a statement. "The discovery of gamma-ray emission from GRB 190114C … shows that the GRB explosions are even more powerful than thought before."

"We are entering a new era of discovering ultra-high energy photons," Bing Zhang, an astrophysicist at the University of Nevada, Las Vegas, who was not involved with the new study, told Live Science in an email. "Since rich physics is expected in the high-energy regime, these observations will for sure bring excitements in years to come."

The new results were published on November 20 in the journal Nature.