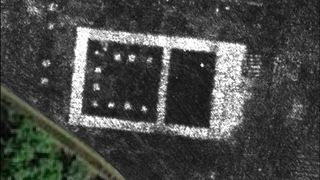 The temple was once part of the city of Falerii Novi, which was abandoned more than 1,000 years ago and buried by time. Archaeologists recently mapped the entire town in remarkable detail with ground-penetrating radar (GPR) revealing previously unknown structures, including the temple and a bathing complex.

Located about 31 miles (50 kilometers) north of Rome, Falerii Novi was founded in 241 B.C. and was occupied until around the seventh century A.D. It was surrounded by a wall and at just 0.1 square miles (0.3 square kilometers) in area, it was quite small.

Today, Falerii Novi's ruins lie in a rural area, and there are no modern buildings atop it. But the city has thus far only been partly excavated. The new map demonstrates that high-resolution radar scans can reveal the secrets of buried cities, providing valuable data about their construction and evolution, scientists reported in a new study.

Related: Photos: A Roman entertainment district brought back to life

"This technique really liberates us for looking at whole towns; we don't have to rely on places like Pompeii that are already mostly excavated," said study co-author Martin Millett, a professor of classical archaeology at the University of Cambridge in England. "This is a technique where, with a little bit of planning, you can gather fantastic quality data over a whole city," Millett told Live Science.

Archaeologists began excavating the ruins in the 19th century; the site was later identified as Falerii Novi based on extensive historic records that described the Roman city, according to the study. In the late 1990s, other researchers conducted magnetic surveys of the site, measuring patterns in soil magnetism to visualize buried structures. This technique produced a map showing the street grid and most of the city buildings, but with one reading taken about every 20 inches (50 centimeters), the map's resolution was poor, painting "a fuzzy picture" of what the city looked like, Millett said.

For the new study, the researchers deployed a grid of ground-penetrating radar antennae, fixed to a cart and towed over the site by an all-terrain vehicle. They bombarded the site with radio wave pulses, taking measurements every 2 inches (6 cm) and reflecting off objects underground to a depth of 6.5 feet (2 meters), according to the study. This showed Falerii Novi's buried structures in high resolution and in three dimensions.

Each scan provided a "slice" that the researchers then stitched together to create the map. Thanks to the new data, a much sharper picture of the long-hidden city emerged. The exceptional resolution enabled the study authors to perform detailed architectural analysis that would otherwise have been possible only through excavation. One structure, to the west of the city's southern gate, was clearly a temple; "you can see steps leading up to it, the columnated courtyard around it and the altar," Millett said.

A market building and a bath complex were also visible for the first time, as well as a large enclosure that may have been a public monument, according to the study.

Another intriguing find was the unusual layout of Falerii Novi's water supply system, as the radar scans revealed networks of pipes running underneath the city's buildings. In other ancient Roman towns that have been fully excavated — or nearly so — water pipes typically ran parallel to the city streets. Those water systems are therefore thought to have been installed during a later stage of the city's construction, after most of the buildings were already in place.

But in Falerii Novi, pipes were installed under the buildings, running diagonally across the town. That would have been impossible to do unless the pipes were put in place first, before construction of any of the buildings. This offers an unexpected glimpse of how the Romans designed and built some of their cities, according to the study.

"In a sense, that changes the game for looking at Roman urbanism," Millett said. "If we can do this across a whole series of cities, we begin to get new insights into how their urban planning worked."

The findings were published online June 8 in the journal Antiquity.