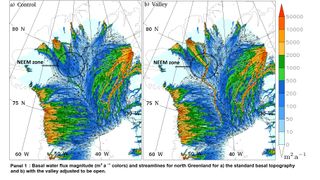 The model on the right shows water flow in northern Greenland in the presence of a valley extending under glacial ice.
(Image: © Chambers et al.)

SAN FRANCISCO — Far below the frozen cover of the Greenland ice sheet sprawls miles of bedrock — and extending through that bedrock for close to 1,000 miles (1,600 kilometers) is a valley that may contain a subterranean river, transporting water from central Greenland to the northern coast.

In the past, planes flying overhead had partially mapped a rocky, subsurface valley under the ice, but their radar coverage of the region left gaps, said Christopher Chambers, a researcher at Hokkaido University in Sapporo, Japan.

To build a clearer picture of what lurks below Greenland's surface, Chambers and his colleagues created simulations to explore the valley at different depths and model how water might melt from the surface of a glacier to the depths below — perhaps creating a flowing river, Chambers told Live Science. He presented their findings on Dec. 9 here at the annual meeting of the American Geophysical Union (AGU).

Radar maps showed that the valley floor was extremely level at depths of 980 feet and 1,640 feet (300 meters and 500 meters) below sea level, Chambers said. This is highly unusual for a feature that is so long, "and that in itself is like a potential smoking gun that this could be" a spot with active erosion or sediment deposition, such as a river, he explained.

First, the researchers digitally modeled the valley and removed the blocks of missing data. Once they had a continuous, open valley, they put it in a Greenland simulation, and melting water from the glacier began to redistribute itself underground, flowing along the valley's base. In the simulations, the scientists also incorporated a known hotspot located deep in Greenland's interior, and they found that the hotspot generated enough flowing water to travel along the valley all the way from Greenland's center to the northern coast.

"Eventually if you get it deep enough — minus 500 meters [1,640 feet] — the water is now flowing the entire length along the valley and then exiting at Petermann Fjord," creating a pathway that measures up to 1,600 kilometers (1,000 miles) long Chambers said.

Because this river would be running in darkness for hundreds of miles under the ice, the researchers named it "the Dark River," they wrote in a summary of their research. The Dark River likely doesn't have a very strong or constant flow, because glacier melt disperses over a large area, Chambers said. The river could occasionally be quite powerful "but only at certain times," when large reservoirs of meltwater build up and then release into the valley, he explained.

Editor's Note: This story was updated on Dec. 17 to reflect that the depth of the valley reflects feet/meters below sea level.