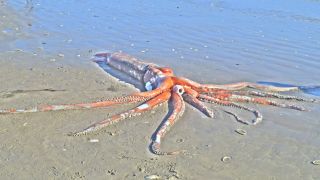 When a giant squid washed ashore on a South African beach, one woman's first instinct was to save its life.

"At first, I just wanted to get it back into the ocean," Adéle Grosse, of Cape Town, told Live Science in an email. "[But] on closer observation, one could see that it was dead."

Sightings such as this one of the giant squid (Architeuthis dux) — a carnivorous beast whose 1-foot-wide (30 centimeters) eyes are the largest known peepers in the animal kingdom — are rare, and typically happen only once every few years, said Michael Vecchione, an invertebrate zoologist at the Smithsonian's National Museum of Natural History in Washington, D.C., who was not involved with this squid's discovery, told Live Science.

Grosse said she and her husband found the giant squid's remains during a morning walk on Golden Mile Beach in Britannia Bay, in southwest South Africa, on June 7. "Oh my word, seeing it at first really took my breath away," she said. "Honestly, it looked like a majestic prehistoric animal."

It's unclear how the giant squid died, but "we had big swells the night before, and it was my understanding that the swell washed up this beautiful squid onto the beach in the early hours of the morning," Grosse said. "We looked for bite marks or injuries and could not really find anything."

After uploading a few images to social media, Grosse — who runs the #SeaLoveLight pages on Facebook and Instagram — was able to connect with Wayne Florence, curator of marine invertebrates at Iziko Museums of South Africa. Florence and his team collected the squid and are now storing it at a freezer facility until they can properly study its DNA and anatomy once the COVID-19 lockdown ends, according to a statement from the museum.

The squid was likely more than 13 feet (4 meters) long and probably weighed over 660 lbs. (330 kilograms), Grosse estimated. That's actually on the shorter side for a giant squid, whose females can reach up to 60 feet (18 m) long, according to a 2013 study in the journal Proceedings of the Royal Society B.

It's so rare to see A. dux, whose tales of its size have inspired the Kraken, the fabled sinker of ships, as well as the killer creature described in author Jules Verne's 1869 serialized book "Twenty Thousand Leagues Under the Sea," according to that study. It wasn't until 2004 that the giant squid was seen in its natural habitat, and 2013 that the first video footage of it was published. Just last year, another crew filmed a giant squid alive for the second time in history.

There are still many mysteries surrounding the behemoth, but scientists have learned a few tidbits over the years. For instance, these massive creatures usually hang out about 2,000 feet to 3,200 feet (600 to 1,000 m) below the surface, in underwater canyons and where continents or islands slope down into the deep sea, Vecchione said. These areas likely have plentiful food for the giants, including fish, other cephalopods (a group that includes squid, octopuses, cuttlefish and nautiluses) and even other giant squid, according to the 2013 study.

Giant squid have eight arms, as well as two longer tentacles that help them grab prey, Vecchione said. Each of these 10 appendages are covered with serrated suckers with powerful suction, Vecchione said.

Grosse's photos show these legs surrounding a white cylindrical body part. This is the squid's beak, which likely popped out due to muscle relaxation when the squid died, Vecchione said. When a squid eats, it uses its beak to bite off little pieces of the prey. "The esophagus goes through the middle of the brain, so it has to bite pieces of food so that they'll be small enough to squeeze through the brain," Vecchione noted.

Vecchione commended the Iziko Museums of South Africa for planning to collect the squid's DNA. "One long-standing question is how many species of giant squids there are," he said. The 2013 study found that there was just one species of giant squid, based on an analysis of 43 tissue samples from different individuals.

The newfound squid will be the 20th in the collection at Iziko, which has the largest collection of giant squid in Africa. Iziko's largest squid is 30.5 feet (9.3 m) long, or more than twice the length of its latest addition, the museum noted in the statement.