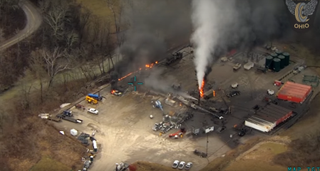 A little-noticed 2018 methane leak at an Exxon Mobil site in Ohio was one of the worst in recent memory, outpacing the methane emissions from the entire oil and gas industries of many countries.

That's according to a paper published Dec. 16 in the journal Proceedings of the National Academy of Sciences and first reported in the The New York Times. When the natural gas well in Belmont County, Ohio, blew in February, it was a significant local event, prompting the evacuation of about 100 residents within a 1-mile (1.6 kilometers) radius, the Times reported. But it wasn't clear how large the leak was until researchers in the new paper, studying data from a new European Space Agency (ESA) methane-monitoring satellite, spotted the plume. The blown well was pumping 132 tons (120 metric tons) of methane into the atmosphere every hour, give or take 35 tons (32 metric tons). That's nearly double the rate of a much more famous leak reported at a SoCalGas site in Aliso Canyon, California, in 2015.

Invisible, odorless methane is one of the most important sources of greenhouse gases after carbon dioxide, the researchers wrote, accounting for at least one-quarter of all global warming that greenhouse gases are causing in 2019. That's despite the substance's concentration in the atmosphere, which is much lower than CO2's. The gas is 80 times more potent at warming the planet than carbon dioxide in the first decade after the substance released.

Methane is also, in some ways, a simpler problem to address: Emissions of this gas hang around in the atmosphere for just 10 years, while carbon dioxide can last thousands of years. But methane emissions are difficult to track, with many significant emissions sources likely going unreported, the authors of the new study wrote. The advent of remote methane-sensing equipment on ESA satellites is offering researchers a new window onto the problem.

The sheer scale of the Ohio incident might have gone unnoticed if the team of Dutch and U.S. researchers behind this paper hadn't decided to specifically look for the leak in the satellite data after hearing reports of the blowout, the Times wrote. The researchers spotted the leak's plume traveling north along the Ohio-Pennsylvania border and then east into Pennsylvania.

"[The satellite] observed the blowout emission on 27 February, 2018, which was the 13th day in the blowout period, which likely does not represent the peak emission rate," the researchers wrote in the paper.

The leak continued until March 7, at which point the event had gone on for 20 days, the researchers wrote.

It's likely that other, similar leaks routinely go unnoticed, the authors said.

"Our study shows how [methane] emissions from large gas leakages due to accidents in the oil and gas sector can escape the greenhouse gas emission-accounting system, adding a significant source of uncertainty to the annual estimates reported to the United Nations Framework Convention on Climate Change (UNFCCC)," the researchers wrote.

Improvements in satellite monitoring might help researchers get a better handle on the issue, the researchers added. That monitoring might become even more important soon; the Trump administration is trying, not for the first time, to roll back regulations designed to prevent methane leaks that come from oil and gas extraction, according to The Washington Post.

Exxon originally reported smaller figures for the methane leak, though the company now accepts this paper's numbers, according to the Times. A company spokesman, Casey Norton, told the Times that the event was an "anomaly." He added that Exxon scientists would "sit down" with the researchers in the new study to see how the company might avoid under reporting methane leaks in the future.