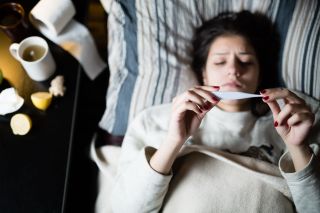 Coronavirus may be in the headlines, but it's still flu season, and a weird one at that — officials are seeing a new spike in flu activity as a second strain of flu hits on the heels of the first.

The 2019-2020 flu season already had an unusual start — in December and early January, the main strain of flu virus circulating was a type called influenza B, Live Science previously reported. Typically, influenza B does not cause as many cases as influenza A strains (H1N1 and H3N2) and tends to show up later in the flu season, not at the beginning. Indeed, the last time influenza B dominated flu activity in the U.S. was during the 1992-1993 flu season, according to the CDC.

But now, influenza A is making a comeback. In recent weeks, there has been a surge in activity of H1N1 in the U.S., according to data from the CDC. And that means even more people are going to the doctor for flu — the percentage of people visiting the doctor for flu-like illness increased from 6.6% of all visits last week to 6.8% of all visits this week, according to the CDC.

This type of "double-barreled" flu season is unusual, according to Healthline. Although something similar did happen last year, in which an initial wave of H1N1 activity was followed by a wave of H3N2 activity.

"We may well have, for the second year in a row — unprecedented — a double-barreled influenza season," Dr. William Schaffner, an infectious disease specialist at Vanderbilt University in Nashville, told WebMD.

So far this season, there have been an estimated 26 million illnesses, 250,000 hospitalizations and 14,000 deaths from flu, according to the CDC.

Although the number of hospitalizations are typical for this time of year, officials are seeing higher-than-typical hospitalization rates among children, Dr. Nancy Messonnier, director of the CDC's National Center for Immunization and Respiratory Diseases, said in a news conference today (Feb. 14).

As officials talk about the potential threat of coronavirus in the U.S., "I want to remind everyone of the very real threat of seasonal influenza," Messonnier said.

And with H1N1 activity increasing, it could mean flu season will drag out longer than usual, according to Healthline.