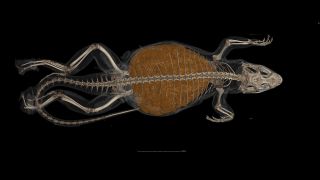 A greasy, sandy diet left a northern curly-tailed lizard with a belly distended by a heavy ball of unpassable poop. The mass was so large that it made up nearly 80% of the animal's body weight — a record-breaking body-to-poop ratio, according to a Florida biologist.

As the lizard gulped down insects and other small reptiles near a pizza parlor in Cocoa Beach, Florida, it also swallowed particles of grease-soaked sand. Over time, the grains stuck together to form a lump that was too dense for the lizard to excrete, said Natalie Claunch, the researcher who found the lizard, and a doctoral candidate in the School of Natural Resources and Environment at the University of Florida  in Gainesville.

And the more that the constipated lizard ate, the bigger the poop mass grew.

Naturally, when Live Science's editor-in-chief heard about this, she responded: "Dump everything and write."

Related: Images: Exotic lizards pop out of the ground in Florida

If only the unfortunate lizard had had that option. But by the time Claunch found the reptile, it was unable to excrete the tightly-packed, sandy mass. All nutrients had been sucked out of the dense ball in its gut, and the lizard was nearly out of room to eat anything more; it was slowly starving to death and was therefore humanely euthanized, Claunch wrote in the March 2020 issue of the journal Herpetological Review.

When Claunch picked up the pear-shaped lizard — a female — she recognized right away that the mass stretching its belly wasn't a cluster of ready-to-lay eggs.

"Eggs feel like large jelly beans, and you can feel them individually," she told Live Science in an email. "This was a semisolid putty-like mass."

Dissection showed that the lizard's internal organs were so squeezed that they had atrophied, particularly its ovaries and liver. The mass was so dense that it was even visible in computed X-ray tomography (CT) scans, said Edward Stanley, an associate scientist in the Florida Museum of Natural History's Department of Herpetology.

When Stanley performed the scans, he was "a bit nervous" about handling the delicate, bloated body "because it was so full," he told Live Science.

"I was concerned that unless I was careful, I might pop it," he said.

The lizard weighed about 1 ounce (28 grams), and the mass alone weighed 0.8 ounces (22 grams), or about 78.5% of the lizard’s total weight. This represents "the largest feces-to-body mass ratio recorded in a living animal," Claunch reported. To put that into perspective, scientists previously documented a Burmese python (Python bivittatus), a species known for digesting enormous meals (and excreting huge poops), that produced a fecal mass representing a mere 13% of the snake's body weight, Claunch wrote.

Inside the bolus were the remains of an earlier meal — the skull of an anole, which are part of the lizard’s natural diet, said Stanley.

Northern curly-tailed lizards (Leiocephalus carinatus) are native to the Bahamas and other Caribbean islands; they were introduced in southeastern Florida in the 1940s, when a Palm Beach resident released several dozen of the lizards on his property to combat insect pests, said Hank Smith, a professor at Florida Atlantic University and a wildlife biologist for the Florida Park Service.

In the decades since their release, the voracious invading lizards have replaced many of the smaller native lizard species — some of which have become the curly-tailed lizards' prey.

"They're the T. rex of our little ground critters," Smith told the South Florida Sun-Sentinel in 2006.

This isn't the first curly-tailed lizard with pervasive poop problems; Claunch and her colleagues have found three other individuals with fecal masses that were 30% or more of their body weight.

"We had actually found a curly-tailed lizard similar to this one the year prior, near the same location, with a fecal mass nearly 40% of its total body mass," Claunch said.  However, it's unclear how long it may take these sand-packed masses to accumulate in a lizard's gut.

"There is no good way to tell because we don’t have studies on 'normal' digestion in the species to compare to, yet," Claunch said.