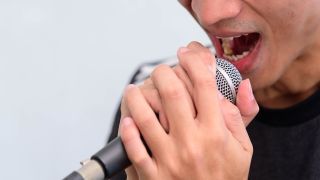 Once more, with feeling.
(Image: © Shutterstock)

When some people perform karaoke, they sing their hearts out. But one man in eastern China took it a little further than that. He sang for so long and with such intensity that he experienced a collapsed lung.

After performing 10 consecutive songs — all with very high notes — the 65-year-old suffered from chest pains and had difficulty breathing, the South China Morning Post (SCMP) reported on August 8.

The man, identified by the surname Wang, visited a hospital in Nanchang county the next day; doctors told him that his lung had collapsed, a condition known as pneumothorax. Dr. Peng Bin-fei, one of the emergency room physicians, said that Wang's lung collapsed "because of the high lung pressure caused by singing high notes," SCMP reported.

However, avid karaoke fans needn't give up their microphones just yet, as such an injury is extremely rare and likely stemmed from a preexisting lung condition, experts told Live Science.

During a pneumothorax, air that would normally fill the lung is instead is rerouted into the area between the lung and chest wall, according to the Mayo Clinic. When that happens, the growing air pocket presses on the lung, forcing a partial or complete  collapse that causes breathing difficulties.

A collapsed lung can happen after a traumatic chest injury, but may also be caused by lung disease. In a case such as the karaoke singer's, which appeared to be a "spontaneous" collapse, there was likely a lung anomaly that was previously undetected, said Dr. Enid Neptune, an associate professor of medicine at Johns Hopkins School of Medicine in Baltimore, Maryland.

These types of lung abnormalities are known as blebs or bullae — air pockets of varying sizes that can develop at any time during a person's life, Neptune said.

Scream out my lungs

Blebs and bullae in another individual are what led to a young girl's lung collapse not after karaoke, but after prolonged screaming at a One Direction concert, Live Science reported in 2017. After a bout of forceful screaming at a show, the fan developed shortness of breath; when she visited the emergency room at a local hospital, doctors confirmed that she was suffering from collapsed lungs, created when the pressure of her screams forced air from her respiratory tract into multiple pockets outside her lungs.

Dr. J. Mack Slaughter Jr., a doctor of emergency medicine in Texas, examined the One Direction fan when he was a resident in emergency medicine at the University of Texas Southwestern Medical Center in Dallas. The doctor described the music fan's condition in a paper published in 2017 in the Journal of Emergency Medicine. At that time, the landscape of medical literature on lung collapse from intense vocal activity "was pretty barren," Slaughter recently told Live Science in an email.

"There were a few case reports — an opera singer and a shouting drill sergeant — but this is far from common," he said.

However, lungs with blebs and bullae can certainly be predisposed to collapse under certain conditions, according to Neptune.

"If you play the tuba; if you have these forceful coughing spells where you generate very high pressure in your lungs; or if you engage in air travel where there are acute shifts in the air pressure; in those scenarios you can develop a pneumothorax in the setting of an abnormal lung structure," Neptune said.

But getting a collapsed lung from singing — or even screaming at a concert — "would be highly unusual," she added.