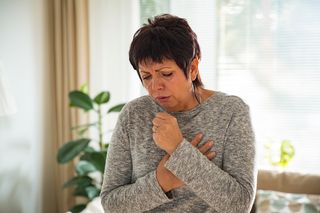 A stock photo of a woman coughing.
(Image: © Aleksandra Suzi/Shutterstock)

A woman in Massachusetts with "whooping cough" broke her rib in a fit of spasmodic coughing, according to a new report of the case.

The 66-year-old woman went to the doctor after she developed a dry cough that lasted two weeks, along with severe pain in her right side, according to a new report of the case. Initially, doctors had diagnosed her with a viral respiratory infection (which could be a cold or the flu, for example), but her symptoms still hadn't improved after five days.

Her primary care doctor saw that the woman had a large bruise across her right flank (between her rib cage and her hip), and the woman felt pain in her chest when doctors touched it.[7 Absolutely Horrible Head Infections]

A CT scan of her chest and abdomen revealed that she had a "displaced fracture" of her ninth rib on the right side, the report said. A displaced fracture means that the bone has broken, and the two ends of the broken bone have separated, according to the U.S. National Library of Medicine.

Doctors also took swabs of her nose and throat, and found that she tested positive for whooping cough, according to the report, which was published today (Jan. 17) in The New England Journal of Medicine.

Whooping cough is a respiratory disease caused by bacteria called Bordetella pertussis, according to the Centers for Disease Control and Prevention (CDC). Early symptoms of the illness usually resemble those of a cold, such as a runny nose and mild fever. But about one to two weeks later, infected individuals can develop a violent cough. During coughing "fits," an infected person may cough over and over, until the air is gone from his or her lungs, the CDC said. When the person inhales again, they may make a "whooping" sound when they breathe in, which is how the disease got its name, according to the National Institutes of Health.

The disease is most serious in infants, but adults can experience complications from the illness as well, including broken ribs. In one study, about 4 percent of adults with whooping cough fractured a rib from severe coughing, according to the CDC.

The Massachusetts woman had received the whooping cough vaccine, known as Tdap (which stands for tetanus, diphtheria and pertussis), eight years earlier, the report said. Because the effectiveness of the vaccine fades with time, a "booster" shot is recommended every 10 years, according to the CDC.

The woman was treated with an antibiotic, and she needed surgery to repair her fractured rib, according to the report. She has since made a full recovery, the report said.