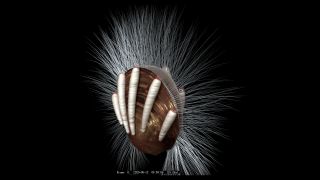 In this reconstruction of the Cambrian brachiopod Neobolus wulongqingensis, tubelike parasites cling to its shell.
(Image: © Zhifei Zhang (Northwest University))

Ancient Cambrian fossils have preserved the oldest known example of parasites in action.

More than 500 million years ago in what is now southern China, tubelike parasites clung to the shells of tiny sea creatures called brachiopods and slurped up their hosts' meals.

Brachiopods are sessile suspension feeders, which means they live fixed in place and capture drifting food particles that are suspended in water. The alignment of the tube-shaped creatures in the newly described fossils suggests that the parasites positioned themselves to intercept food as it flowed toward their host, scientists reported in a new study.

Parasites come in a range of fascinating shapes and sizes. There are near-microscopic dots of parasitic fungus that dine on millipede genitals; parasitic plants that feast on fungus; mind-controlling parasitic protozoans that make rats brazenly approach their predators; and even a parasitic crustacean that devours a fish host's tongue and then replaces the organ with its own body.

Examples of parasitism in the fossil record are also diverse, "from fleas on mammals to mites on insects, and even potentially single-celled parasites on Tyrannosaurus rex," said study co-author Timothy Topper, a research fellow at Northwest University in Xi'an, China and at the Swedish Museum of Natural History in Stockholm.

It can be hard to tell from individual fossils how parasites affected their hosts. But in the newly described fossils, "we have hundreds of specimens of brachiopods — with and without tubes —that have allowed us to statistically demonstrate, for the first time in a Cambrian fossil example, that a host (brachiopod) is negatively impacted by a parasite (encrusting tubeworms)," Topper told Live Science in an email.

During the Cambrian period, about 512 million years ago, dense colonies of ocean-dwelling Neobolus wulongqingensis brachiopods clustered at a site now known as the Wulongqing Formation in Yunnan, China. These brachiopods measured on average 0.09 inches (2.4 millimeters) wide and 0.08 inches (1.9 mm) long and were abundant there, with approximately 60,000 individuals covering about 11 square feet (1 square meter), the study authors reported.

Researchers looked at 429 of these brachiopod fossil specimens; of those, 205 were infected by parasites, which were probably soft-bodied, wormlike, filter-feeding animals that lived inside the mineralized tubes. Some shells had only three or four parasites, but others hosted seven or more, according to the study.

After the scientists examined and compared the brachiopods, they found that parasite-encrusted specimens were notably smaller than their parasite-free neighbors. The researchers also discovered that the parasites' tubes were positioned so that the worms' heads would have poked out over the curved edge of the host's shell and into the stream of nutrient-bearing water that fed the brachiopods.

This hinted that the worms were kleptoparasites — food-stealers — and suggested that when they infested brachiopods that were still growing, the worms stole so much food that they stunted their hosts' growth, the scientists reported.

Tube-dwelling, suspension-feeding marine worms known as serpulids are known to parasitize modern brachiopods and bivalves, sometimes infesting them heavily, Topper told Live Science. "But how exactly they impact their host, in terms of growth or biomass, is unclear," he added.

Could the ancient parasites have provided any benefit to their hosts in exchange for stealing their food? It's possible that the worms' mineralized tubes may have given the brachiopods some protection against predators, but more analysis would be required to say for sure, lead study author Zhifei Zhang, a professor in the Department of Geology at Northwest University in China, told Live Science in an email.

"Demonstrating that parasitism existed in the earliest animal communities, is really just the first step in understanding their impact upon the history of life," Topper said. "I think we've only barely begun to scratch the surface of understanding the early evolution of parasitism."

The findings were published online today (June 2) in the journal Nature Communications.