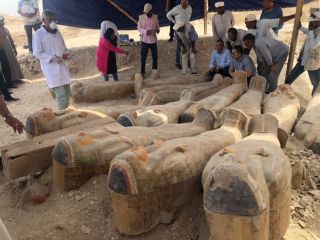 Archaeologists have unearthed 30 sealed wooden coffins with mummies inside at "El-Assasif," an ancient necropolis near Luxor, Egypt, Egypt's Ministry of Antiquities announced this morning (Oct. 19) at a press conference.

Called the "cachette of the priests" because some of the mummies appear to be those of ancient Egyptian priests, the coffins date back about 3,000 years.

Vividly colored paintings on the coffins are so well-preserved one can make out the complex patterns, Egyptian deities and hieroglyphic writing they depict. When discovered, the coffins were arranged in two layers, with 18 coffins on the top layer and 12 coffins on the bottom layer, said Mostafa Waziri, the general secretary of Egypt's Supreme Council of Antiquities, who is leading work at El-Assasif.

Related: See Photos of the "Cachette of the Priests" from Luxor

The mummies inside the 30 coffins consist of 23 adult males, five adult females and two children from ancient Egypt, said Khaled al-Anani, Egypt's Minister of Antiquities, noting that the coffins they are buried in are "exceptionally painted and preserved."

During the press conference, archaeologists opened two of the coffins  one of an adult male and another of an adult female. The two mummies inside the opened coffins looked well preserved with the outer wrappings still intact, completely covering the faces and bodies of the mummies. No artifacts could be readily seen with the mummies, although it's possible that some are concealed within the ancient wrappings.

Excavation is ongoing at the site, and archaeologists still need to decipher the hieroglyphic writing; they will also analyze the artwork on the coffins and the mummies themselves. The analysis may shed more light on who these people were, why were they buried in a cachette, when exactly they lived and what their lives were like.

In November, the coffins will be moved from Luxor to the Grand Egyptian Museum in Cairo, al-Anani said. El-Assasif is a large ancient necropolis where a number of recent discoveries have been made. In November 2018, archaeologists announced that well-preserved mummies were found in two tombs located near where the cachette was found.