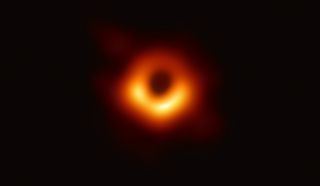 Capturing the first direct image of a black hole earned a team of researchers with the Event Horizon Telescope (EHT) an "Oscar of Science" — the 2020 Breakthrough Prize — along with $3 million.

The EHT team received the honor "for the first image of a supermassive black hole, taken by means of an Earth-sized alliance of telescopes," prize representatives said in a statement. They added that the prize "will be shared equally among the 347 scientists co-authoring any of the six papers published by the EHT April 10, 2019," meaning that each co-author will get about $8,646.

In April, EHT researchers stunned the world with an image of a glowing orange ring surrounding a dark shadow, cast by a black hole in the M87 galaxy. The image shows the contours of the black hole's event horizon, the point beyond which all light and matter succumb to the irresistible pull of gravity.

Receiving the prize was "a wonderful validation of more than a decade of hard work, risk taking, failures, successes, and building an expert team that was committed to the highest scientific goals," said EHT director Sheperd S. Doeleman, an astrophysicist with the Harvard-Smithsonian Center for Astrophysics.

To produce that astounding image, Doeleman and hundreds of other scientists used data from eight telescopes located around the world, creating an Earth-size "eye" powerful enough to peer into the heart of a galaxy in the Virgo cluster, about 55 million light-years from our planet.

"We split into four teams, each working independently to image the data," Doeleman told Live Science in an email.

Then, when the teams came together in July 2018 to compare their findings, they saw that all of the groups were producing similar images showing the black hole silhouette.

"We were awe-struck. We almost didn't believe it," he said. "But after many months of continued analysis we were convinced the ring, marking the orbit light takes around the black hole, was real. And then we celebrated."

What's next for the EHT team? The researchers aim to add to the EHT network of telescopes and launch radio dishes into space in order to capture movies of black holes, Doeleman told Live Science.

"Moving from still images to black hole video will enable new tests of gravity and allow us to study in detail how black holes feed on infalling gas," he said in the email.

With the landmark EHT discovery, black holes were made visible for the first time, but only after many years of dedicated work. Winning the Breakthrough Prize for this achievement "highlights the long-term commitment that is required for such discoveries," Doeleman said.

"It signals to the public that we need to play the 'long game,' investing in science even though it may take decades to pay off," he said.

Editor's Note: Due to an editing error, this story originally stated that each winner will receive $865. They will each receive 10 times that amount, or $8,646.