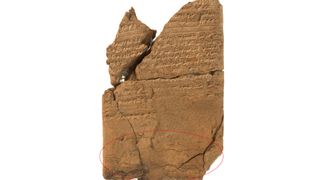 The drawing was overlooked for decades on the tablet from the library of a family of exorcists who lived in the Assyrian city of Assur. The depiction is shown here in red.
(Image: © Staatliche Museen zu Berlin - Vorderasiatisches Museum/Photograph by Olaf M. Tessmer)

An ancient drawing of a demon blamed for epileptic seizures has been discovered on a 2,700-year-old Assyrian clay tablet.

University of Copenhagen Assyriologist Troels Pank Arbøll was examining a tablet of ancient writing at the Vorderasiatisches Museum in Berlin when he noticed the drawing of the demon — portrayed with horns, a tail and a snake-like forked tongue.

The tablet came from the library of a family of exorcists who lived in about 650 B.C. in the city of Assur, now in northern Iraq, Arbøll said. But it's likely it was copied from a much older text.

The tablet is written in cuneiform — a very early system of letters formed by pressing a triangular stylus into softened clay.

The inscription describes cures for convulsions, twitches and other involuntary muscle movements — an affliction called "Bennu" by the Assyrians and now interpreted as symptoms of epilepsy.

Ancient Assyrians, however, thought Bennu was caused by demonic possession.

"I was the first one to notice the drawing, despite the text having been known to researchers for decades," Arbøll told Live Science in an email, "so it is not easily seen today unless one knows it is there due to the damage on the manuscript."

In new research published last month in Le Journal des Médecines Cunéiformes, Arbøll describes the demon as having "curvy horns, a serpent's tongue and possibly a reptile-like eye. … The creature has a long tail placed alongside the left leg…."

I have a new article out on a newly discovered drawing of a Neo-Assyrian demon connected to psychological and neurological disorders, which may be the earliest illustration of epilepsy in a demonic form (see drawing)! Available for free via following link https://t.co/Wo2P6MUoMp pic.twitter.com/lAVNZX7bAmNovember 8, 2019

Arbøll determined the outlines of the damaged drawing over the months that followed his discovery; the text, he suggests, shows the demon that causes Bennu on behalf of the Mesopotamian moon god Sîn.

The ancient Assyrians believed epilepsy was related to madness, and that both were caused by the moon god, he said. This ancient idea is reflected in an English word for madness — lunacy — which implies a connection with the moon, called "luna" in Latin.

Drawings on cuneiform tablets are rare, and portraits of demons are even rarer: "This specific drawing is a depiction of the actual demon, instead of other comparable drawings, which generally depict a figurine made during a ritual to remove the illness," Arbøll said.

The Assyrians did not distinguish between magic and medicine, and magical remedies like rituals and incarnations were used alongside remedies that would be seen as medical today, like ingested potions, external ointments and bandages.

"Doctors" of the time would have treated Bennu-epilepsy by placing a leather amulet around the infected person's neck, heating various ingredients on hot coals and directing the resulting smoke toward the patient, Arbøll said. "Less often, we find mixtures to be ingested or salves applied to the patient."