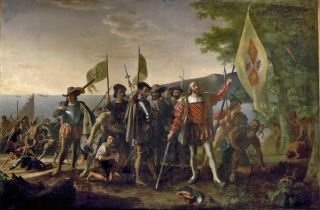 When Christopher Columbus landed in what he called the "New World," he claims to have found himself in the middle of a violent indigenous feud.
(Image: © Painting by John Vanderlyn)

Christopher Columbus got a lot of things wrong about the "New World." He thought that manatees were mermaids, that the Bahamas were a part of Asia and that the indigenous people of the Caribbean were "Indians" eager to submit to their new Christian overlords — i.e., himself. (They're not, they aren't, and they definitely weren't.)

One claim in the explorer's diaries that remains particularly contentious even today regards cannibals. According to Columbus, a tribe of invading cannibal warriors — aka, the Caniba — repeatedly beset his crew and the indigenous communities of the Bahamas when he landed there in 1492. But is there truth to these tales?

While there's no evidence they were cannibals, the Caniba were a real group of South Americans, better known as the Caribs. The group of people from northwest Amazon region are known to have colonized several Caribbean islands beginning around the year A.D. 800, but archaeological evidence suggests they never made it as far north as the Bahamas, where Columbus claims to have encountered them. Either Columbus was wrong again, or historians aren't seeing the full picture of the Carib migration.

Now, a new study published Jan. 10 in the journal Scientific Reports suggests Columbus may have been (partially) right after all. By analyzing more than 100 skulls from the Caribbean (plus a few from Florida and Panama) dating between the years 800 and 1542, researchers concluded that the Carib people were indeed present in the Bahamas as early as the year A.D. 1,000 — meaning Columbus' descriptions of their raids could have been based in reality.

"I've spent years trying to prove Columbus wrong when he was right: There were Caribs in the northern Caribbean when he arrived," study co-author William Keegan, curator of Caribbean archaeology at the Florida Museum of Natural History, said in a statement.

In Columbus' accounts, the New World (actually the modern-day Bahamas) was divided between two main populations: the gentle Arawak people, whom Columbus dubbed "the best people in the world," and the fearsome Caniba, who were marauding cannibals. (The English word "cannibal" actually derives from "Caniba," a name Columbus reportedly learned from the Arawaks.)

Archaeological evidence suggests the Carib/Caniba people expanded from the South American mainland as far north as the island of Guadeloupe, about 1,000 miles (1,600 kilometers) south of the Bahamas. However, this evidence is scant, it's mostly based on pottery and may not be telling the full story, the authors of the new study wrote.

To build a more complete picture of the Carib expansion, the researchers analyzed the morphological features of 103 skulls borrowed from Caribbean museum collections, hoping that the similarities and differences could reveal the cultural origins of those people.

Using their skull structure analysis, the team identified three distinct groups of migrants among their sample. According to the researchers, the Caribbean's earliest settlers came from the Yucatán Peninsula in modern-day Mexico around 5000 B.C., migrating into modern-day Cuba and the northern Antilles. Later, Arawaks from what are now Colombia and Venezuela migrated to Puerto Rico between 800 and 200 B.C. (These migrations are supported by stone tools and pottery discovered in previous archaeological studies, the authors wrote.)

Finally, Carib colonists crossed the sea to arrive at the island of Hispaniola (which now houses the countries of Haiti and the Dominican Republic) around the year A.D. 800, before continuing their expansion into Jamaica and the Bahamas. By the year 1000, violent conflict between Arawaks and Caribs may well have begun.

These findings give credence to Columbus' claims that the Arawaks were often besieged by their aggressive neighbors — but what about the cannibalism? According to Keegan, it's possible that the Caribs did occasionally eat the flesh of their enemies to inspire fear, but there's no real evidence of this happening.

Either way, Columbus' reports of cannibalism had a catastrophic impact on Europeans' attitudes toward the Caribbean and its people, Keegan said. While the Spanish monarchy initially planned to treat indigenous groups with respect and pay them for their work, they reversed their position when Columbus claimed the Caribs were flesh-eating heathens who refused to convert to Christianity.

"The crown said, 'Well, if they're going to behave that way, they can be enslaved,'" Keegan said. "All of a sudden, every native person in the entire Caribbean became a Carib as far as the colonists were concerned."

Editor's note: This story has been corrected to note that the Yucatán peninsula is in modern-day Mexico in North America, not in South America.