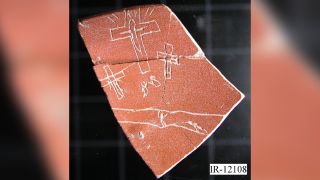 One artifact was said to show the earliest depiction of the Christian crucifixion, but experts said its iconography suggests it was created much later than its supposed date in the third century A.D.
(Image: © DFA/AFA)

A criminal trial has begun of an archaeologist accused of forging a trove of Roman artifacts that allegedly show a third-century depiction of Jesus' crucifixion, Egyptian hieroglyphics and the early use of the Basque language.

Archaeologist Eliseo Gil and two former colleagues appeared this week in a criminal court in Vitoria-Gasteiz, the capital of Spain's Basque Country, The Telegraph reported. They are accused of creating forgeries of ancient graffiti on hundreds of pieces of pottery, glass and brick that they claim were found in the Roman ruins at Iruña-Veleia, about 6 miles (10 kilometers) west of Vitoria-Gasteiz.

Gil claimed the graffiti on the artifacts showed very early links between the Roman settlement in Spain and the Basque language; he also claimed that a drawing of three crosses scratched on a piece of ancient pottery was the earliest known portrayal of the crucifixion of Jesus Christ.

But other archaeologists have disputed the finds. Among other major discrepancies, they pointed out that some of the language of the graffiti shows that it was made in modern times.

Gil and his former colleagues, geologist Óscar Escribano and materials analyst Rubén Cerdán, say they are not guilty of any deception.

Gil became a celebrity in Spain's Basque Country in 2006, when he claimed that hundreds of broken ceramic pieces known as "ostraca" — covered with drawings; phrases in Latin, Greek and Basque; and Egyptian hieroglyphics — had been unearthed at the Iruña-Veleia site.

But some other archaeologists became suspicious, and they alerted officials in the Álava provincial government, which owns the Iruña-Veleia site.

The other archaeologists alleged that writing on the artifacts, supposedly from the second to the fifth centuries, contained words and spellings from hundreds of years later, modern commas and the mixed use of uppercase and lowercase letters, a practice which dates from after the eighth century.

The graffiti on some of the artifacts also contained hieroglyphics spelling out the name of the ancient Egyptian queen Nefertiti, who was probably unknown until her rediscovery in the early 20th century, and a Latin motto created around 1913 for an international court at The Hague in the Netherlands.

Experts also considered that the Christian iconography of the crucifixion portrayed on the most famous artifact dated from hundreds of years later than claimed.

A scientific commission convened by the provincial government in 2008 ruled that 476 of the artifacts were manipulated or outright fakes and that Gil and his colleagues had perpetrated an elaborate fraud, according to its report.

In response, the provincial government stopped Gil and his company from working at Iruña-Veleia and pressed charges, which have now come to court.

Gil maintains that he is innocent and that there is no scientific evidence that the artifacts are fake.

At a news conference in 2015, Gil said the accusations, as well as his ostracism from the archaeological world, were like "going through torture."

The prosecutor's office of the provincial government is seeking more than 285,000 euros ($313,000) for damage to authentic artifacts from Iruña-Veleia allegedly inscribed with fake graffiti.

They've also asked the court to jail Gil and his associates, fine them and disqualify them from working on archaeological sites.

Many archaeologists are convinced that the artifacts are fake, but they don't know if Gil and his associates are responsible for the inauthenticity of the artifacts.

Related: 6 Archaeological Forgeries That Could Have Changed History

"I have no doubts about their falsity," said archaeologist Ignacio Rodríguez Temiño, told Live Science in an email. "There is no dispute on the Iruña-Veleia case in the academic world."

Rodríguez Temiño works in Seville for the provincial government of Andalucía. He is the author of a paper published in the archaeological journal Zephyrus in 2017 that detailed evidence that the artifacts from Iruña-Veleia are fakes and possible reasons for the deception. He noted that Basque public companies and government bodies awarded Gil and his associates sponsorships worth millions of dollars for their work at Iruña-Veleia. The fake artifacts were an attempt to promote certain ideas about Basque nationalism, including the early use of the Basque language and the early Christianization of what is now the Basque Country, he said.

Both are "stories that a certain segment of Basque society longs to hear," he said.