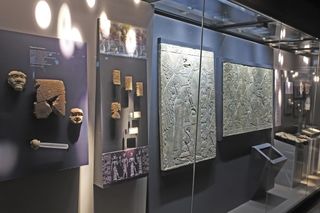 Photo of some of the artifacts in the Ancient Mesopotamia Speaks exhibit at the Yale Peabody Museum of Natural History.
(Image: © Future)

Ancient Mesopotamia refers to a region within the Middle East, primarily between the Tigris and Euphrates rivers, where several large and powerful civilizations thrived for thousands of years. Often called the "cradle of civilization," ancient Mesopotamia is credited with the development of numerous technologies, languages, religions and cultures.

Agnete Lassen is associate curator of the Yale Babylonian Collection at the Yale Peabody Museum of Natural History. She co-authored the book "Ancient Mesopotamia Speaks" (Yale University Press, 2019) that accompanies the Peabody Museum exhibit of the same name.

Lassen spoke with Live Science's sister publication, All About History, and answered a few questions about the mysteries of Mesopotamia.

Q: How do you begin curating a collection like this? What are your key objectives?

When I first started working as a curator in the Yale Babylonian Collection three and a half years ago, it was an amazing adventure of discovery. I found something unknown and fabulous every time I opened a drawer or peeked into a cabinet. It sometimes still feels like that.

Our recent exhibition, Ancient Mesopotamia Speaks, is an attempt to showcase not only the amazing things that are in Yale's collection, but also to show people what a fascinating world ancient Mesopotamia was. We have tried to show both how similar we are with the ancient Mesopotamians, but also how different we are in some respects. We wanted to tell stories, rather than just focus on single pieces. Because of this, the exhibition features both collection highlights, such as the Yale Gilgamesh tablet and a Babylonian cookbook, but also mundane items, such as an administrative tag with a date on it.

Q: What are there consistent elements that help to bind ancient Mesopotamia together as a single historical period?

A good example is two clay tablets we juxtaposed in a case: one dating to c. 3300-3000 BCE and another tablet dating to 13 January 526 BCE and thus some 2,500 years apart. However, both tablets deal with small cattle. Both come from the city of Uruk, perhaps both even from the same temple precinct in Uruk. Both tablets use lines and format to lay out the information in the record. This example illustrates some of the remarkable continuities in Mesopotamian economic structures and record keeping.

Q: What are the biggest challenges in deciphering cuneiform text from this era?

The earliest form of cuneiform, called proto-cuneiform, was almost entirely logographic. This means that each sign represents a whole word or meaning. There were few phonetic, i.e. signs that represent sounds, and grammatical elements, which means that it is difficult even to know what language was being written down.

The script also used the rebus principle to express meaning, where a meaning could be represented by a sign that sounded the same. For example, the sign that depicts plants (SAR) could also be used to represent the verb to write: 'sar'. This means that rather than employing thousands of signs, the cuneiform script made do with much fewer. At the same time, this makes decipherment tricky.

Related: Cracking Codes: 5 Ancient Languages Yet to Be Deciphered

Q: What can we learn about the social structures of these communities from these artefacts?

Most of the earliest cuneiform texts deal with administration and economy. However, 10% or so are very different: they are the word lists or lexical lists. These lists were used in schooling as a way for aspiring scribes to memorise how words were written.

One of the earliest of these texts is the list of professions, the so-called Standard Professions List. It is known in many copies and was used in scribal training for some 1,000 years. It lists all of the professions and offices people held in early Mesopotamian society, from the top of the social hierarchy to the bottom.

Q: We understand that are some cookbooks in the collection. Do any of the recipes work?

Indeed, they do work and some have been cooked many times. There are three clay tablets with recipes dating to c. 1800 - 1700 BCE. Two of these have very detailed instructions, but are also very broken and fragmentary.

The third tablet is in much better condition. It lists 25 recipes for stews, 21 meat-based and four vegetarian or 'green' as the tablet specifies at the end of the text. Most of the recipes contain one or more onion type vegetables, such as leek, garlic, shallots and onions. They also use spices, such as cumin, coriander and cilantro, as well as salt.

Like most premodern cooking manuals, these recipes do not quantify the ingredients and there is an element of guesswork and interpretation in cooking them. A personal favourite is the tuh'u dish, which can be thought of a proto-Borscht.

Q: What can you tell us about the work of Princess Enheduanna and what she wrote about?

Enheduanna was the daughter of the king Sargon and the earliest named author in human history. She lived around 2300-2200 BCE. She was the high-priestess of the goddess Inanna in the city of Ur and her most famous work, the Exaltation of Inanna, is dedicated to that goddess.

In it, Enheduanna expresses her anguish and humiliation at being expelled from her temple and home, and calls upon her goddess to help her and punish the wrongdoers. Inanna was a fierce and vengeful goddess and Enheduanna praises and calls upon those violent qualities in her poem. After her death, the works of Enheduanna survived and were still copied and studied by students 500 years later.