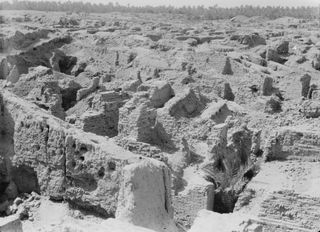 At the time the tablet was written, more than 3,500 years ago, Babylon (shown here as seen in 1932) Babylon was one of the most important cities in southern Mesopotamia, controlling an empire in the region. It's possible the writer of the tablet's riddles lived within this kingdom. The tablet's current location is unknown.
(Image: © G. Eric and Edith Matson Photograph Collection, Library of Congress, in public domain)

Millennia before modern-day Americans made fun of their politicians or cracked crude jokes over a cold one, people in ancient Mesopotamia were doing much the same thing.

The evidence of sex, politics and beer-drinking comes from a newly translated tablet, dating back more than 3,500 years, which reveals a series of riddles.

The text is fragmentary in parts and appears to have been written by an inexperienced hand, possibly a student. The researchers aren't sure where the tablet originates, though they suspect its scribe lived in the southern part of Mesopotamia, near the Persian Gulf.

The translation, by Nathan Wasserman, a professor at the Hebrew University of Jerusalem's Institute of Archaeology, and Michael Streck, a professor with the Altorientalisches Institut at Universität Leipzig, is detailed in the most recent edition of the journal Iraq. [In Photos: Ancient Riddles Decoded]

The text was written in Akkadian, using cuneiform script. It was a language commonly used by the Babylonians, along with other ancient kingdoms in the Middle East.

"This is a relatively rare genre — we don't have many riddles," Wasserman told LiveScience in an interview, referring to riddles written in the Akkadian language.

Unfortunately, researchers are not certain where the tablet is presently located. In 1976, it was housed in the Iraq Museum in Baghdad. At that time, a scholar named J.J. van Dijk published a copy of the Akkadian inscription, which the researchers used for their translation.

Since 1976, Iraq has been through three wars and, during the 2003 invasion, the museum was pillaged. "We tried to figure out where the tablet is now, [but] I don't know," Wasserman said. He added that the tablet is small and not very impressive-looking, something that a looter may take a pass on, "I very much hope that it is still there," Wasserman said. [10 Battles for the Control of Iraq]

Some of the decoded riddles are crude and sexual, while others are complex and metaphorical. One of them reveals what appears to be a bit of political humor, albeit with a dark, violent twist.

He gouged out the eye:

It is not the fate of a dead man.

The answer is a governor.

"This riddle describes the power of a governor namely to act as a judge who punishes or sentences to death," write Streck and Wasserman in the journal article.

Wasserman has seen examples in other Akkadian texts of people criticizing their leaders. "We have some interesting traces of political criticism, and [I] might say even say political anger," he said. "It could be a kind of political humor expressed in this governor riddle."

While the governor riddle reflects a sort of gallows' humor, others are much lighter.

In(?) your mouth and your teeth (or: your urine)

constantly stared at you

the measuring vessel of your lord (-What is it?)

The answer, it appears, is beer.

Politics and beer were not the only things the scribe commented on. Two of the riddles, now in a fragmentary state, are sexual, crude and difficult to understand.

One of them, whose translation is uncertain, reads:

The deflowered (girl) did not become pregnant

The undeflowered (girl) became pregnant (-What is it?)

The answer, strangely enough, appears to be "auxiliary forces," a group of soldiers that tend not to be reliable.

Wasserman said that the meaning of this riddle eludes him. "I don't understand what is really going on," he said, adding that auxiliary forces are often below-average soldiers, "and they are not really trustworthy, sometimes they run away in the middle of the battle."

Another riddle, this one even more fragmentary and whose translation is uncertain, is also very crude.

is by the one who has intercourse (with her) (-What/who is it?)

The researchers aren't sure of the riddle's solution since the answer has been lost.

One of the riddles appears to rely on metaphor to get its point across.

The tower is high

it is high, but nonetheless has no shade (- What is it?)

The answer is sunlight.

"You have to think about the riddle like the 'Lord of the Rings' or 'The Hobbit'; it is metaphor," Wasserman said. Imagine you are outside and see a beam of light going from sky to Earth. [Science Fact or Fantasy? 20 Imaginary Worlds]

"It looks like a tower, but it gives no shade, of course, because it's light itself,” Wasserman said. "The answer is the proof for its own validity."

The last riddle relies on logic:

(Note the translation of the first line is uncertain)

The answer is a broken bow.

Archery was widely used in the ancient world for both warfare and hunting. If your bow was broken you would be able to do neither. CREDIT: steve estvanik | shutterstock

Archery was widely used in the ancient world for both warfare and hunting. If your bow was broken you would be able to do neither. CREDIT: steve estvanik | shutterstock

The researchers emphasized in their paper that the number of surviving Akkadian riddles from this time period is "very small" and, overall, this tablet provides a rare opportunity to explore this genre of ancient writing.