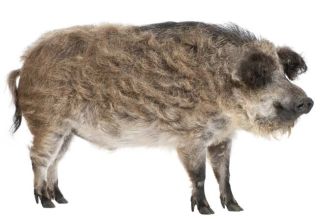 Sheep or pig? The mangalitsa was bred from hardy Hungarian pigs (Bakonyi and Szalontai) crossed with the Šumadijas from Serbian. It is totally swine. It produces less meat then the naked pink pigs you're used to seeing, so it has become quite rare. Image
(Image: © Dreamstime)

A series of photographs depicting a strange-looking sheep-pig creature have been circulating around the Web recently. The animals look much like a sheep—and are covered with the typical wool-like coat—but a closer inspection of the head and face reveals a decidedly porcine countenance.

What are these bizarre creatures? Escapees from Dr. Moreau's island? Hoaxes created for an animal sideshow at a State Fair? Photoshopped gags to forward to amused friends and co-workers?

People love mysteries, and people especially love a mystery that comes with a weird photo. Many photos are of strange, perhaps impossible, animal hybrids. Sometimes they are meant as mini-morality lessons and accompanied by implicit or explicit warnings about meddling with genetics.

Often the photos are faked. Other times the photos themselves are real, but purposely misidentified. Last year, for example, a weird photograph of a human-dog hybrid alleged to be "a trans-species between a Labrador retriever and human" was widely circulated. It was not an animal but instead a realistic sculpture by artist Patricia Piccinini.

So what is this new, bizarre sheep-pig creature?

It is a real animal, though it's not new, nor is it a sheep-pig hybrid. It's just a hairy pig called a mangalitsa (see photo). The mangalitsa has no sheep DNA in it; in fact it is more closely related to wild boar.

While Americans are familiar with the common, mostly hairless, pink-skinned North American pigs, the mangalitsa is from the highlands of Austria and Hungary, where their sheep-like coat protects them from harsh European winters. The mangalitsa are not genetically engineered in any way, merely the product of millennia-old animal husbandry breeding practices.

The mangalitsa was bred from hardy Hungarian pigs (Bakonyi and Szalontai) crossed with the Šumadijas from Serbian. They have been around for more than a century, but photos of the animals are being noticed right now because a zoo in Essex, England, is displaying them in an effort to save the endangered animals. Turns out they produce less meat then other pigs, perhap explaining why they've become rare.

Benjamin Radford is managing editor of the Skeptical Inquirer science magazine. His new book Scientific Paranormal Investigation will be published in June; this and his other books and projects can be found on his website. His Bad Science column appears regularly on LiveScience.