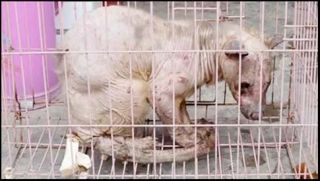 The supposed Yeti detained in China. The rather pathetic looking creature could be a civet, or cat-like animal. If it's a Yeti, it's not as large or menacing as has long been imagined. Image
(Image: © YouTube)

A curious animal recently caught by hunters in the Sichuan province of China is being touted by some as a Yeti, the Oriental version of Bigfoot. The mysterious hairless animal was initially described by eyewitnesses as having features resembling a bear or kangaroo.

The finding is part of a growing number of mysterious mangy creature reports in recent years. And it could get worse.

The supposed Yeti is being shipped to Beijing for DNA testing, but a photograph of the animal clearly shows a small creature with four legs and a tail.

Loren Coleman, author of several books on Bigfoot, believes the animal is likely a civet, a cat-like creature native to the area. Whatever it is, it's not a bear, nor a kangaroo, nor a dragon, and certainly not a Yeti.

In artist depictions and in the public’s mind, beasts such as the Yeti and Bigfoot are usually huge, powerful animals — not the scared, sickly, pathetic little "mystery creatures" that are found. Almost all mammals have hair, so when a hairless mammal is seen, it arouses mystery, curiosity, and of course wild speculation. Yet among biologists and zoologists, this is a non-mystery.

What the civet and other animals have in common is a bad case of mange. Mange is a parasitic skin infection caused by mites. Sarcoptic mange, a highly contagious form of the disease, can cause hair loss as well as skin welts and crusting. Because people usually see animals with their full coat of fur, animals with mange can be very difficult to identify.

In North America there has been a dramatic increase in the number of "mysterious" hairless animals found both alive and dead over the past five years. The "Montauk monster" was a hairless raccoon, though most were initially identified as chupacabra, the Latin American vampiric beast. Various chupacabras found in Texas were identified through DNA analysis as belonging to the Canidae family — dogs and coyotes.

And now this Yeti. What's going on?

If reports of strange animals with mange seem to be more common over the past few years, there's a good ecological reason: global warming.

LiveScience spoke to Mike Bowdenchuck, state director for Texas Wildlife Services, who explained why mysterious, hairless animals are more common in Texas and the southwest than other areas:

"Down here, animals don't die of mange, because the temperatures are warm enough," Bowdenchuck said. Rather, the animals live with mange.

"Mange is very common in colder areas, in fact wolves are getting it in Montana right now, and in North Dakota foxes get it," he said, noting a big difference: "Up there it's fatal, so you never see animals with the severe cases that we see in the southern climates, because they don't live long enough for the mites to get that bad to cause the hair to fall off. They die of hypothermia first."

Animals that have lost their fur are more vulnerable to the cold, so in warmer climates they live longer (and be more likely to be seen). Thus one might conclude that sightings of hairless animals will become more common as the climate warms. The extended forecast calls for more non-Bigfoot, non-Yeti, and non-chupacabra mangy monster sightings.

Benjamin Radford is managing editor of the Skeptical Inquirer science magazine. His book "Scientific Paranormal Investigation" will be published in July. His books, films, and other projects can be found on his website. His Bad Science column appears regularly on LiveScience.