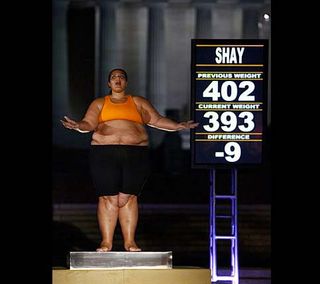 A biggest loser contestant during a weigh-in, which helps determine who stays and who is booted off the show.
(Image: © NBC)

NBC's "The Biggest Loser" is all about records. In the past seasons, the weight-loss reality show has repeatedly set new benchmarks for heaviest contestant (454, 476 and 526 pounds), fastest 100-pound weight loss (seven weeks), and most weight lost in one week (34 pounds).

The show, which takes obese Americans and pits them against each other in a battle to lose the most weight and win $250,000, thrives on extreme numbers. But physicians and nutritionists worry the show's focus on competitive weight loss is, at best, counterproductive and, at worst, dangerous.

"They're taking people who have been inactive and are not in good shape and boom, automatically subjecting them to this stress," Carol Wolin-Riklin, the bariatric nutrition coordinator for the University of Texas Medical School at Houston, told LiveScience. "Things are going to happen."

And indeed, things have. Two patients were hospitalized after collapsing during a one-mile (1.6 km) foot race for the season 8 premiere. This year's season 9 opened with another strenuous challenge in which contestants raced 26.2 miles (42 km) on stationary bikes. Show medical consultant and UCLA professor Rob Huizenga had to drag one protesting contestant off her bike when she was stricken with severe cramps. A second contestant, 526-pound Michael Ventrella, was treated for exhaustion.

The show's producers point out that contestants are under medical supervision and say the extreme nature of the competition is inspirational for viewers.

And of course, there are serious health risks to being as obese as the Biggest Loser contestants. According to the Centers for Disease Control and Prevention (CDC), obesity can increase the risk of heart disease, diabetes, high blood pressure and certain types of cancer. The risks become more pronounced as the obesity becomes more severe, and losing weight is a very good idea, said Wolin-Riklin ¬— if done right.

"The way I go about encouraging healthful weight loss is by working on changes one at a time," she said. "By making these changes bit-by-bit I think you have a better shot at having long-lasting lifestyle changes."

But weight loss on "The Biggest Loser" is far removed from weight loss in the real world.

For one thing, contestants start out in worse shape than most. Seventeen of the 22 contestants have a body mass index (BMI) over 40, meaning they are severely obese. In the "real world," more than one-third of U.S. adults, or 72 million people, are considered obese with a BMI of 30 or higher, according to the CDC. But research published last month in the Journal of the American Medical Association found that the number of Americans with a BMI over 40 is just under 6 percent. In other words, the show's claim that the contestants are the "epitome" of American obesity is a bit like saying that VH1's "Rock of Love with Bret Michaels" epitomizes the American dating scene.

And then there's the exercise program. Contestants work out five to six hours a day, eating strictly supervised diets. They routinely drop double-digit pounds each week. The contestant who loses the smallest percentage of body weight can be sent home.

In reality, said physician Robert Kushner, the clinical director of the Northwestern University Comprehensive Center on Obesity, a safe rate of weight loss is about one to two pounds per week.

"I think a lot of people can feel quite defeated that they're losing weight in what we would call a recommended amount, but they would have been voted off the show immediately," Kushner told LiveScience. "So the message, to me, is just all wrong."

So is the science. Losing weight rapidly can be risky, according to Virginia Tech professor of human nutrition, foods and exercise Janet Walberg Rankin. Patients who lose weight quickly run the risk of gallstones, mineral deficiencies, loss of muscle tissue and reduced bone density.

Risks aside, weight-loss experts say that the biggest problem with the Biggest Loser is that extreme methods of dropping pounds are less likely to work in the long run. Several former Biggest Loser contestants have regained some or all of the weight, which doesn't surprise Kushner.

While researchers aren't sure if repeated cycles of weight lost and weight gained are more dangerous than staying overweight or obese, the psychological toll of failing to keep weight off can be grim, said Kushner. People often feel like failures and become hopeless about their health.

Those looking for a safe way to lose weight or get healthier permanently should make small changes, Kushner said, like gradually increasing exercise or substituting healthy foods for unhealthy ones. In the real world, slow, steady and committed wins the race.

"We're not looking for extreme makeovers in someone's lifestyle," Kushner said. "We're looking for changes that they can sustain long-term."