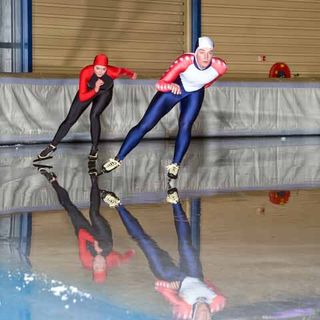 For the athletes competing now in the Winter Olympics in Vancouver, altitude can be an important factor in making it to the medal stand, but not for the reasons you might think.

And the impact of altitude in the Vancouver Olympics could mean we won't see many records set in sports such as speed skating.

Most people are familiar with the problems of training at sea level and then moving to higher altitudes: When you're higher up, the air is less dense. And while the air is still made up of a certain percentage of oxygen and other chemicals, there are fewer oxygen molecules in a given volume of air. That means the body initially takes in and delivers less oxygen to the muscles, which can lead to athletes tiring out much sooner than they would at lower elevations.

But the lower air density at higher altitudes can also result in faster speeds in ski and skating races due to less aerodynamic drag, and it can affect other technical components in skill sports, such as figure skating, ski jumping and snowboarding. The decrease in air density — about a 3 percent reduction for every 1,000 feet (about 300 meters) gained in elevation — may seem small, but can force athletes to have to compensate in their moves.

"Many athletes perform thousands upon thousands of moves so they get a certain motor pattern ingrained," said Robert Chapman, an expert in altitude training at Indiana University in Bloomington. "A different altitude will change the feedback they get from balance and "proprioception," where proprioception is our sense of the parts of the body in relation to each other and in space.

The changes that athletes have to make and the time it takes to adjust to the higher elevation can depend on the type of sport.

"In an endurance sport such as cross country skiing or biathlon, for competition at altitude it takes about 10-14 days to adjust. For a skill sport, it's harder to judge how long it will take to acclimate to the reduced air density at altitude," Chapman said. "Hopefully, these athletes have incorporated this into their training, maybe in the last year or for a period of time, not just the two weeks leading up to competition."

Chapman wrote about the topic in a special Winter Olympics issue of the journal Experimental Physiology.

For the Vancouver athletes, the elevation challenges can depend on what sport you're in. While Vancouver itself and the ice events are nearly at sea level, other venues range in altitude from around 2,600 feet (790 m) for the sled events to around 5,000 feet (1,500 m) for women's and men's downhill skiing.

"The general thought is that altitude slows you down because you have less oxygen going to your muscles," Chapman said. "But at altitude, just as it is easier to hit a home run in the thin air of Denver, speed skaters in Calgary and Salt Lake City could skate faster, move through the air faster, because there was less drag."