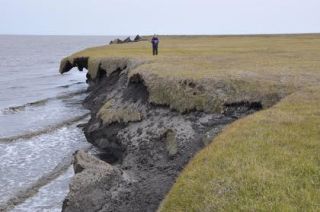 A new study indicates part of the northern Alaska coastline is eroding by up to 45 feet annually due to declining sea ice, warming seawater and increased wave activity.
(Image: © Robert S. Anderson, University of Colorado.)

The erosion rates from these forces are greater than anything seen along the world's coastlines, with the coast midway between Alaska's Point Barrow and Prudhoe Bay falling into the ocean in the inland direction by up to one-third the length of a football field annually, scientists have found.

"This is pretty eye-popping," Robert Anderson of the University of Colorado at Boulder said here today at the annual meeting of the American Geophysical Union.

Time-lapse imagery and videos taken by Anderson and his team show how frozen blocks of silt and peat — that contain about 50 percent to 80 percent water ice – are toppled into the Beaufort Sea within a matter of days during the summer months as large waves and warm waters combine to attack the coast.

The dramatic erosion is created by the combination of three main factors: longer ice-free conditions in the summer months (which are lengthening by about two weeks per decade); warmer ocean waters that can melt more of the ice trapped in the coastal soils; and the widening of the gap between the coastline and the sea ice that occurs in the summer months, giving waves more room to batter 12-foot-high (3.5 meters) coastal bluffs.

"What we are seeing now is a triple whammy effect," Anderson said. "Since the summer Arctic sea ice cover continues to decline and Arctic air and sea temperatures continue to rise, we really don't see any prospect for this process ending."

"The landscape is beginning to respond to the acceleration of warming," he said.

The rates of erosion in these areas are several tens of meters per year, compared to other rocky coasts, where erosion rates would be closer to several millimeters or centimeters a year, Anderson said.

"These rates are way out of whack," he said.

This erosion is concerning to scientists not just for the indications it gives of the rate of global warming in the Arctic, but because the area is an important habitat for birds and other wildlife.

While there are no towns in the specific area studied, coastal erosion threatens some abandoned military and petroleum structures. And areas that now aren't as close to the coast could find themselves threatened.

"Even something 1 kilometer [0.6 miles] away could be dumped into the sea in a matter of years," Anderson said.

You can watch the video at the university's web site.