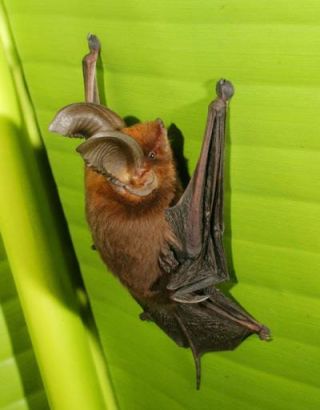 Researchers have discovered why a species of sucker-footed bat that lives in Madagascar roosts head-up. The bat uses wet adhesion rather than suction to cling to leaf surfaces. This clinging mechanism will only keep the bat secure when head-up.
(Image: © Daniel Riskin.)

A tiny bat that hangs out in Madagascar is an odd sleeper: Unlike other bats that hang upside-down, this one roosts head-up, and now scientists know why.

The sucker-footed bat, as it is known, likely sticks to surfaces with a sweat-like substance and would easily become unlatched if hanging upside down.

Called Myzopoda aurita, the sucker-footed bat is just 2 inches long (5 cm) and weighs a mere one-third of an ounce. They can be found clinging to the smooth inner surfaces of broad, fanlike leaves that furl up like tubes and are located high off the ground in a tree called Travelers Palm (Ravenala madagascariensis).

M. aurita is one of just six bat species known to snooze right-side-up, while the rest of the 1,200 or so bat species sleep hanging from their toenails.

Scientists have known from recent work that four of the head-up nappers, called disc-winged bats, use pads tipping their limbs to create suction and cling to furled leaves.

And until now, scientists had thought M. aurita also used its teensy pads for suction. Turns out, while the disc-winged bats have suction pads whose shape allows the animal to securely roost head-up, that's not the case for M. aurita.

These results, detailed in the Biological Journal of the Linnean Society, show M. aurita can still get a powerful hold.

"Each forelimb pad, on average, can hold roughly 8.6 times their own body weight," study researcher Daniel Riskin of Brown University in R.I. told LiveScience. "The equivalent would be a 150-pound rock-climber holding on with one hand and supporting their own weight, plus a 1,140-pound horse tied to their legs."

Riskin and Brown biologist Paul Racey knew of three or four basic mechanisms used by animals to stick to surfaces. Riskin and his colleague ruled out the mechanism used by some geckos because it requires dry surfaces, and the researchers knew M. aurita had pads kept moist by a network of glands.

To tease out the two remaining mechanisms — suction and wet adhesion — the researchers ran several experiments with 28 sucker-footed bats captured from Madagascar. Suction is stronger when the animal is pulled away from a surface than dragged along that surface, while the opposite is true of wet adhesion.

So in one experiment, a researcher held the bat's right forelimb against a smooth surface and pulled the animal straight away from the surface, while measuring the sticking strength. In the same setup, the bat's forelimb was pulled backward parallel to the horizontal surface. Then, the bat was pushed forward, also parallel to the surface.

The results showed the forelimb pads were more than nine times weaker when lifted away from the surface than when dragged parallel to it, suggesting they weren't using suction.

To confirm wet adhesion, the researchers tested the bats' sticking strength on two different metal surfaces — one with evenly spaced holes and the other with the holes covered by tape. The thinking was that if the bats relied on suction for their cling power, the holes would keep them from establishing a seal. Here, the force per unit area was essentially the same no matter if the surface was dotted with seal-breaking holes — again suggesting wet adhesion.

To figure out whether the bats sleep head-up because of this clinging mechanism, the researchers analyzed the results from the tests in which the bat was pulled or pushed parallel to the smooth surface.

When pushed forward, in the direction of the head, the bats' forelimb pads were much weaker than when the bats got pulled backward, toward the hind end. Essentially, the pads peeled off the surface when pushed in the forward direction.

Here's how the results translate into a sleep position: Since the forelimbs are weak at holding on when pushed forward, the bats would slip from the smooth leaf surfaces if hanging upside down, as gravity would pull them "forward" toward the head.

"If I hold the bat and it is roosting head up, [and] if I grab its little butt and I pull downwards it can hold itself up," Riskin said. "If I push in the upward direction its pads just peel off."

The researchers suggest this peeling evolved to allow the bats to walk without having to unstick their pads every step they take.