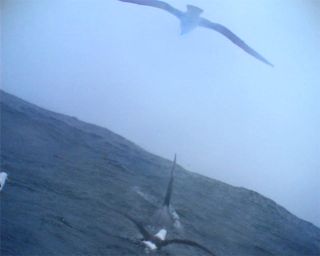 A killer whale breaks the ocean surface (see dorsal fin) as four black-browed albatross (one of which has a mini camera attached to its back and therefore isn't shown). The seabirds are likely snagging scraps left over by the killer whale.
(Image: © National Institute of Polar Research, Japan.)

Miniature digital cameras have caught for the first time an albatross feeding alongside a killer whale, waiting for scraps from the messy eater, scientists report.

The snapshots spotlight the so-called black-browed albatross (Thalassarche melanophrys), a seabird named for its dark eyestripe, with a wingspan of just under 8 feet (2.4 meters) and weighing up to about 10 pounds (4.5 kg). The birds are declining about 2 percent to 4 percent every year, partly as a result of getting caught on long fishing lines.

Though past research has provided insights into what albatross eat, relatively little is known about how the seabirds spot fish prey in the seemingly "featureless" open ocean. The new study, detailed this week in the journal PLoS ONE, suggests they do so in groups when diving and might even rely on a top predator to bring hard-to-reach fish food to the surface.

One caveat: Many of the images were too dark, obscured by feathers on the birds' backs or, as in most cases, just of the open ocean rather than a foraging event.

"Out of the many, many thousands of images we got, there were remarkably few that showed us how they feed. It is a big ocean," study researcher Philip Trathan of the British Antarctic Survey told LiveScience. "We have a lot of pictures of this very big ocean." He added that technological advances could allow for smaller and lighter cameras that can be fitted onto the birds' heads (to ensure feather-free scenes) as well as cameras with video capability.

In January, the research team attached miniature digital cameras, each about the size of a large lipstick and weighing about 3 ounces (82 grams), to the backs of four black-browed albatross breeding at colonies on Bird Island, South Georgia, in the Southern Ocean.

Over about five days, the cameras collected some 28,725 images, revealing the birds dive relatively infrequently, though when they do take the plunge they tend to do so with other birds, and in one case with a killer whale (Orcinus orca).

The killer whale snapshot revealed a camera-equipped albatross along with three of its kin following the top predator. Subsequent images, however, got obscured by the albatross's feathers, though temperature measurements suggest the albatross did land on the ocean surface after spotting the killer whale.

Here's what the albatross get out of the deal: Killer whales feed on a wide range of prey, including other whales, penguins and Patagonian toothfish (Dissostichus eleginoides) by stripping them from longline fisheries. While black-browed albatross feed mainly on squid, fish and krill, the deepwater toothfish can be an important part of their diet in some breeding grounds, the researchers say.

Since albatross are shallow divers, they can only access the toothfish through an interaction with deep-diving predators like killer whales, or with commercial fisheries, the researchers say.

And the albatross depend on messy eating of sorts. When killer whales feed, fragments of their prey are often left near the sea surface, where clever seabirds can snatch them without expending too much energy.

"Targeting the less-mobile prey fragments may also reduce the number of plunge dives needed to capture a prey item," the researchers write. "Therefore, a close association with foraging killer whales would help albatrosses to find food more efficiently in the apparently 'featureless' sea, especially in a year when the availability of aggregative prey species (such as Antarctic krill in South Georgia) is low."

What do killer whales get out of the deal?

"On very rare occasions, I suppose if an albatross stayed on the surface within reach of the whale for too long, there is a remote chance it could itself be eaten," Richard Phillips, also of the British Antarctic Survey told LiveScience. "Many tropical seabirds are eaten by sharks, and indeed this is one explanation why most tropical seabirds do not roost on the water overnight but instead return to land." Phillips leads some of the Survey's albatross research, but wasn't directly involved in the current study.